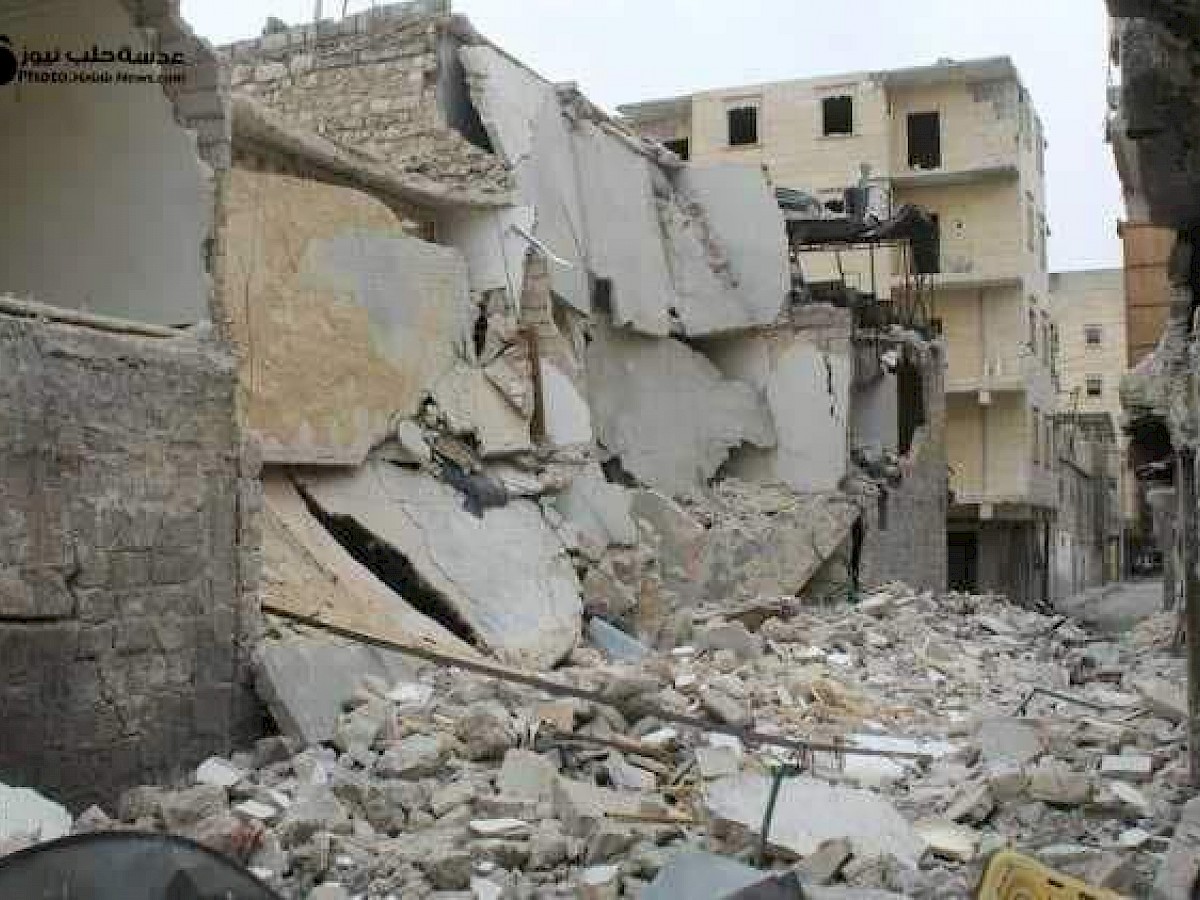 The house of Amin and his family was completely destroyed during an air raid on Aleppo - while they were still inside. As the house collapsed, the family was buried underneath the debris. As if by a miracle, they all survived.

Amin [1] and his family used to own a house in Aleppo, in northwestern Syria. It was a nice hosh, one of the classic Syrian houses with an internal courtyard which are typical of the architecture of many cities in the country. The family, comprising Amin, his wife Waad, and his father and mother, Bashir and Sabirah, had spent much effort to furnish both their home in the city center as well as their second house, a small farm on the outskirts of Aleppo, where they even had a swimming pool. It was a meeting place for family, relatives, and friends. Amin worked for a social service provider, and his father for a public transport company. Their rooms were richly furnished, meant to make up a gorgeous and presentable home that provided them with a respectable and contented life (see videos Interior home Aleppo center I and Interior home Aleppo center II).

That very day, by chance, Amin had decided to go to work. His parents were sitting in the yard and Waad was coming down the stairs of the house when she suddenly heard the roar of an approaching plane. Intuitively, she returned to the yard in order to warn her in-laws. The aircraft advanced menacingly, the sound of its engine becoming louder and louder. Only a few moments later, the heavy detonation of a barrel bomb wrecked not only an entire wing of their house but also large parts of their street. If they had been in the part of the building where they usually reside, no one would have survived; that part of the building does not exist anymore.

Waad, Bashir, and Sabirah were buried under debris, paralyzed and numb, when their neighbors pulled them through a crack in a collapsed concrete slab – you may recognize it on the photograph. The three cannot remember the names of the people who saved them, but Bashir described the actual moment of their salvation as like being reborn. They were displaced in Aleppo, then Amin was arrested, and his father was blackmailed by the militias. It was obvious that they had to flee Syria since there was no safe place left and most of their belongings had been reduced to rubble. After the family had managed to flee to Turkey, an uncle sent them videos of their former home on the outskirts of Aleppo – a home that had been turned into wreckage, a home that had lost all of the features and qualities that had once been so appreciated (see video Farm Aleppo outskirts destroyed).

But war brought not only material losses – like the devastation of parts of Aleppo’s old city and citadel – but also the loss of relatives and friends (see Print of Aleppo citadel and Osama al Hamdan). For Amin, it also brought police terror, imprisonment, torture, and humiliation under the Assad regime, which had left behind deep scars on his skin and mind, and which will never completely heal.

This research project was an opportunity for Amin to pay tribute to his closest friend, Osama Al Hamdan, also called Abo Taim (the father of Taim), with whom he had grown up like a brother. He died in 2015. Before Amin handed over the print he had made of his friend, he wanted to, at least for a moment, place them in the permanent exhibition of the Friedland Museum – not only as a personal act of remembrance, but above all as a gesture for his friend's son, who is, fortunately, still alive.

1] All names are anonymized, except that of Osama Al Hamdan, who is commemorated in this contribution.

Amin's destroyed house on the outskirts of Aleppo © Amin 2014
Interior of Amin's house in Aleppo © Amin 2014
Aleppo
The Torn Banknote
The torn family
Dust from a Previous Life
Theft of Things and Time
A Picture worth 4.000 Euros
Papers: Things Obtained in Displacement
"The Last Things"
Lagerszenen
Crossing the Farther Shore
Zahra's Bangle
Dilîşan's Camera
About the value of the title deed
Open
Archive