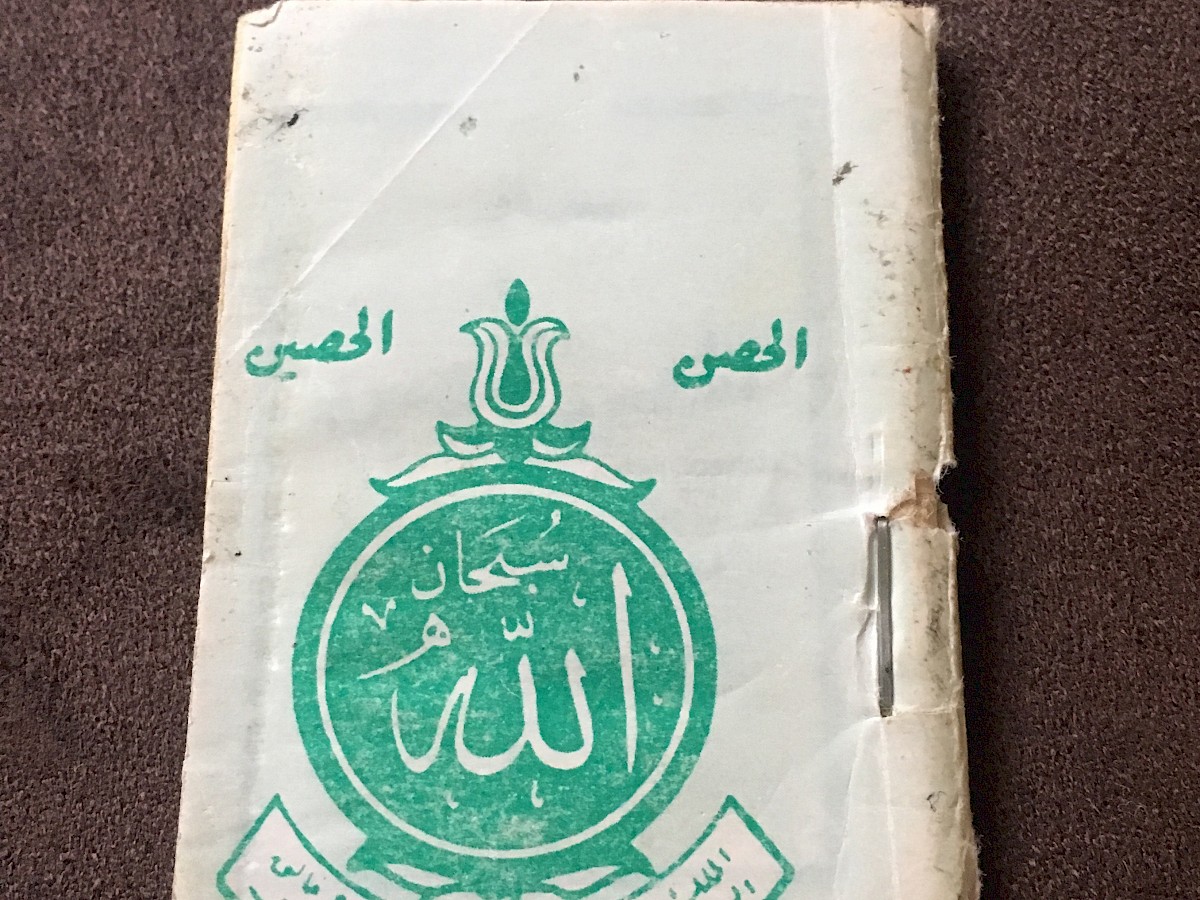 A small prayer book, originally distributed as one of many objects on the streets of Homs in Syria, is now a constant companion in a light brown, leather purse. An object that has undergone an arduous flight from Syria via Egypt and the Mediterranean, and which its owner Monzer still carries with him today as a protective object.

The prayer book is very small; it measures about 4x3 centimeters and is made of a light-colored, leather material. On the front of the book, next to Homs, the name of Monzer's city of origin in Syria, is the inscription "Subhan-Allah", which can be translated roughly as "Glory to God". On the back is the lettering "Muhammad", the name of God's messenger and central prophet in Islam. The lettering is green and artistically rendered in green ornaments. In contrast to this artistic design, the small book is very marked by Monzer's escape story, has tears and appears softened in some places. The pages of the prayer book are stapled together by a large staple. The book itself contains a collection of particularly central suras of the Koran. Of these, the suras An-Nas, Al-Ikhlas and Al-Falak have become the most significant for Monzer. The suras An-Nas and Al-Falak are supposed to protect against evil internal and external influences, while the short sura Al-Ikhlas is said to have a special protective function.

The prayer book was given to Monzer by a woman on the street in Homs, Syria. At this point, the prayer book is not a special object for Monzer, the woman, or the passersby who receive it. Rather, the books are handed out to passersby like informational material; many people do not even pay attention to the woman or the books, and some accept them but do not glance at them or carelessly put them in their pockets. The prayer books are indistinguishable from each other at this point and have the same value. Monzer accepts one of the woman's prayer books and has carried it in his wallet ever since - first to his law exams in Syria, and later during his flight to Germany. He describes it as a "protection" that has helped him through every difficult situation.

During his flight in Egypt, Monzer regularly reads the suras of the prayer book and prays five times a day. This changes when he flees on a rubber dinghy across the Mediterranean Sea via a collection point from Alexandria with another 300 people. On the boat, Monzer refrains from reading the suras of the prayer book; the risk of the book being soaked or lost is too high. To maintain a connection to the suras and contents, Monzer quietly recites supplications (duas). In these moments, as Monzer describes, Allah is beside him, providing support for the rest of his days on the boat. Without the prayer book and the recitation of supplications, Monzer is certain he would not have survived the flight to Italy.

For Monzer, a mass product produced in large numbers and distributed indiscriminately among passers-by in Homs has become a special object, which for him has no comparable value - for example to the other prayer books distributed.

In his explanations of the "cultural biography of objects, " [1] Igor Kopytoff describes such a development as a change from a "commodity " [2] to a unique object with exclusive value. The prayer book is no longer in its original "sphere of exchange " [3] in which it could have been exchanged for comparable objects, but has a special value due to the shared experiences on Monzer's flight. It has become an inalienable object.

This is also the reason why Monzer still carries the prayer book in his wallet as a constant companion: although he no longer recites the duas (supplications) as he did on the inflatable boat, he still benefits from the protective power of the book. He is firmly convinced that it still protects him from all the dangers that life throws at him.

[3] In the essay mentioned above, Kopytoff describes three spheres of exchange, under each of which different objects can be exchanged for one another. If the goods are in a sphere of exchange, they are a commodity. If they are assigned a special value, they fall out of their sphere of exchange. Kopytoff calls this process "singularization”.