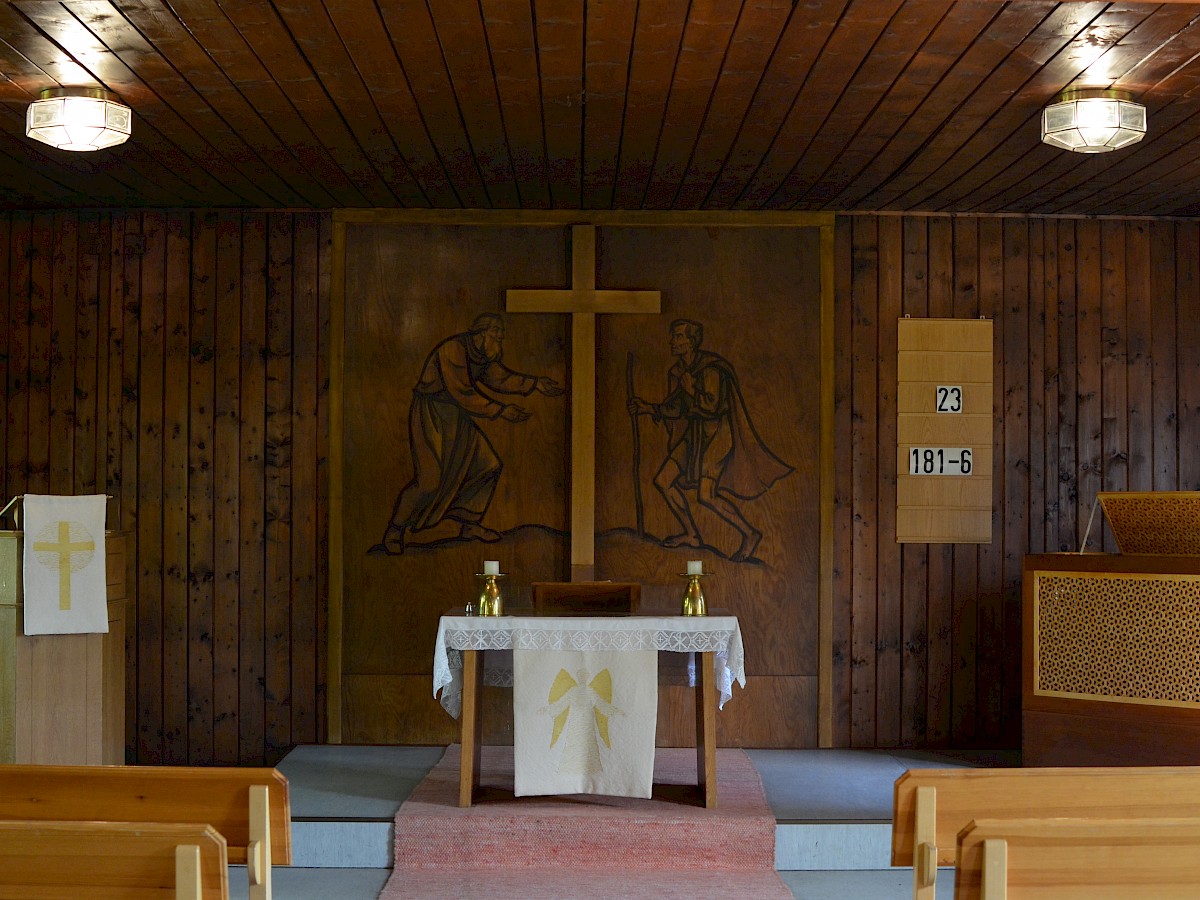 The wooden cross is a well-known object, often automatically linked to Christianity. In the Protestant chapel in Friedland, the cross is placed centered behind the altar. What questions does the wooden cross raise in Friedland's diverse religious environment, and what new perspectives on the object arise from it?

The Wooden Cross in the Protestant Chapel at Friedland Transit Camp

The wooden cross is fixed to the wall in the center of the Protestant chapel in Friedland. It consists of two light brown wooden planks, which are about 70 and 40 centimeters long. There is no Jesus figure attached to them. The services in Friedland take place under this cross — they are held by Pastor Harms, along with Deacon Shahinian, who came from Aleppo to Germany many years ago and now translates the sermons into Arabic. The services are characterized by Christian content, but it is directed at all people in Friedland; whether Muslim, Christian, Yazidi or Jewish camp residents. Pastor Harms has been holding the services in this manner since October 2016. But there has been a pastor in Friedland since 1945; the Protestant camp-chapel has existed since 1949.

In my regular attendance of the services, the strong presence of the wooden cross caught my attention over and over again because of its size and placement within the chapel. I am interested in different perspectives on the wooden cross, and wonder what reactions are evoked among the visitors regarding the cross, as well as which questions can be generated for further research.

The services take place on Mondays and Wednesdays at 6 pm. The first rows of the chapel are usually filled early. Deacon Shahinian greets the visitors and speaks to them in Arabic.

Then Pastor Harms enters the chapel and welcomes the people. He lingers briefly in front of the wooden cross and takes his place behind the altar. From an outsider’s perspective, it seems that the visitors perceive the cross and the Christian space as a given. People who have just entered the room tend to look around first, but then take a seat on the pews swiftly. According to Pastor Harms, there is a notable state of curiosity in the chapel. Just before he starts to speak, two boys in the first row look at each other in amusement and giggle quietly.

“Welcome! While I know this is a Christian chapel and most of you are Muslim, today we want to emphasize the similarities of our religions, not the differences that are all too often highlighted. Nevertheless, I’d like to talk about Jesus with you, because I know that Jesus is a great prophet in your religion too.“

Pastor Harms then refers to the stories of the residents and asks who came to Germany via Turkey. He encourages people to talk about their stories and learned languages. Afterwards, biblical psalms are recited and translated into Arabic. It also sings songs in Hebrew, Arabic and German. Among this redesigned concept of a service, the cross hangs primarily as a Christian-associated object.

I wonder how these different levels of meaning conform with each other. Has the cross, through the new conception of the church service and the perspective of the camp inhabitants, become a new object? Does it actually play such a central role as is depicted in the chapel? Can it be accidentally overlooked or viewed in a completely different context (of one's own religion)?

Even Pastor Harms himself could imagine that the chapel's room and the wooden cross could be adapted by devout Muslims (as an example) — through their perception of the cross and the acknowledgment of another world religion. Samah Al-Jundi-Pfaff is a member of the museum staff and creates interactive connections between the museum and the camp inhabitants through — for instance — her project “Let’s make it”. She told me that, from her perspective, in spite of the adaptation and acquisition of the Christian symbol, many residents are initially shy to attend a Christian service. Does the wooden cross also create a barrier for the residents, who cannot identify themselves with the materiality of an unfamiliar religion?

Now, after all these impressions, it is important to emphasize the perspectives of the camp inhabitants: How do they view the wooden cross and the Protestant chapel? What stories, experiences and memories do they associate with them and the service in Friedland? Only through their statements answers to the above or other questions can be found.