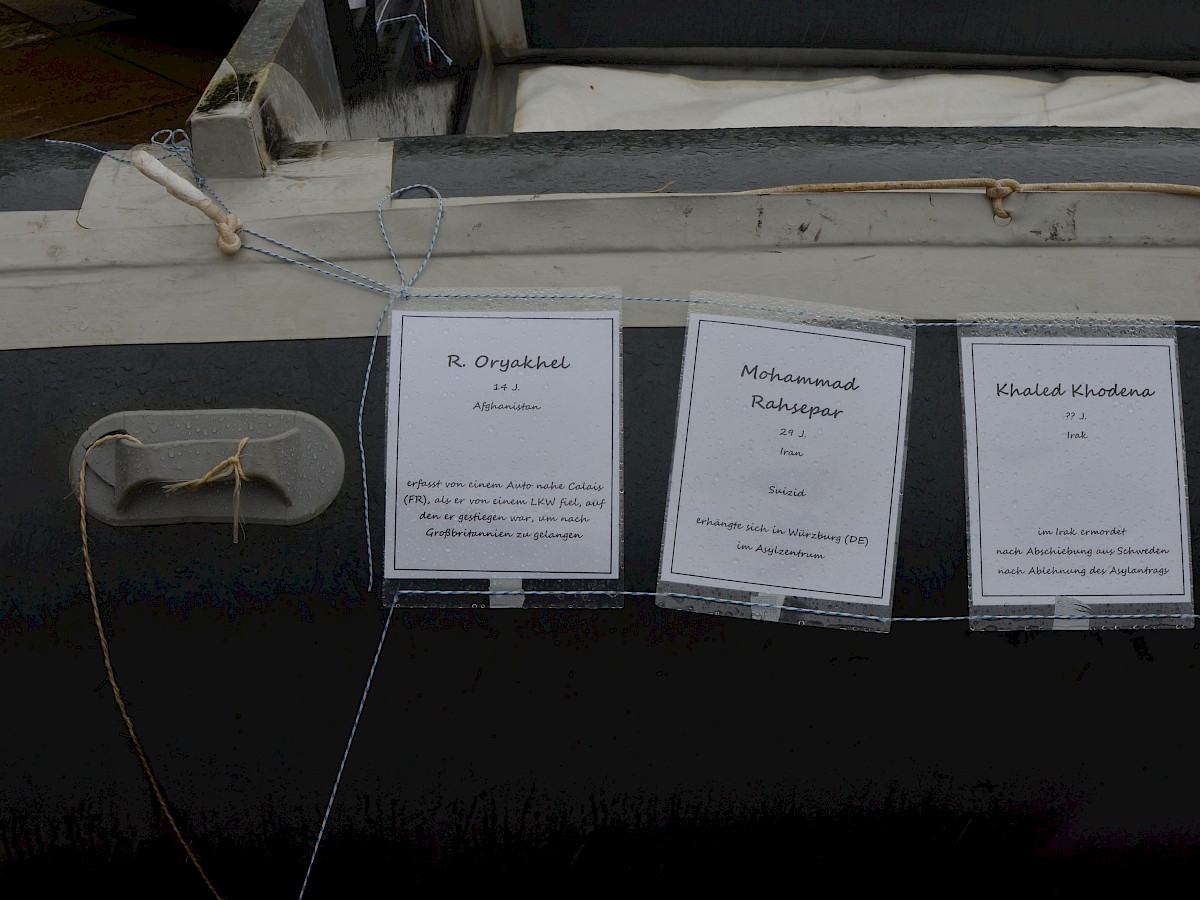 This inflatable was intercepted by the “Libyan Coast Guard”. It documents one of countless failed escape attempts over the Mediterranean Sea. As part of the Seebrücke protest relay, it is now travelling through Germany, promoting safe migration routes, the decriminalisation of sea rescue and a humanitarian reception of those who are on the fleeing.

11 May 2019: A large, dark grey, almost black rubber dinghy on the “Bahnhofsplatz”, the railway station square in Göttingen, which can accommodate approx. 80-100 people. Rain is pouring down and people are busy constantly scooping water from the boat. To us, this situation somehow seems symptomatic for the history of the boat: People tried to flee from Libya across the Mediterranean to Europe in this very boat. It consists for the most part of a grey, hard plastic material and its stern ends with a black and white painted wooden plank. It is not new, scuffs, patches and signs of wear indicate the difficult conditions it has been exposed to in the Mediterranean. Laminated paper slips documenting failed escape stories and thus the deaths of migrants are hanging from its sides. On either side of the inflatable are signs saying: "Enter the boat at your own risk".

While these signs prevent the people of Göttingen from boarding the boat, the desperation and/or hope of the people who dare to attempt the crossing with such boats is greater than their fear of the many unknowns and dangers of the Mediterranean. The boat was salvaged in 2017 by the sea rescue NGO Sea-Eye. Previously, about 120 desperate people had tried to flee from Libya across the Mediterranean in this inflatable boat. The escape failed: they were picked up by the "Libyan Coast Guard" and brought back to Libya. What happened to them afterwards - whether they survived, attempted to escape again or were detained in camps - is uncertain.

Now the boat travels through Germany as part of the protest relay of the international civil society movement Seebrücke and promotes safe migration routes, the decriminalisation of sea rescue and a humanitarian reception of people who are on the run.

Here on the station square in Göttingen, the boat is irritating: It doesn't really fit into the small-town idyll of Göttingen and besides, it’s on dry land. It belongs on the water – it is useless on land; it cannot transport anyone from one place to another. Nevertheless, it is a "moving object", as Svašek calls it.1 It not only changes and moves literally, but it is also a moving object in the sense that it triggers emotions:

It has moved people across the Mediterranean during their desperate attempts to flee from the situation in their home countries and the inhuman situation in Libya, and now it has moved on and changed. It got a new meaning and a different use: Within the protest relay through Germany, the civil society organisation Seebrücke hopes to move as many people as possible in the second sense of the word, emotionally, with the inflatable boat. The members of Seebrücke want to set an example for its mission: The transformation of as many cities and districts as possible into "safe harbours", which declare their solidarity with the refugees, actively support sea rescue and declare their willingness to accept people beyond the distribution quota in the city or district. 2

And the irritation seems to succeed in large parts, despite the bad weather. Passers-by inside the station square stop in front of the boat, some seem to be affected and exchange views on the issue. The flyers and information offered by the organisers are also accepted in almost all cases and at least read briefly. Even those who rush past the boat and only glimpse at it seem to find it difficult to escape the subject, due to the size and presence of the inflatable. They, too, cannot help but take a look at boat.

This boat probably succeeds particularly well in moving people emotionally because it is an actual boat people had used in an attempt to flee, and therefore the "language" it speaks is notably authentic. It is not just any inflatable boat, because each of its signs of use and wear and tear tells stories of the violence of the sea, but also of the courage and despair of the people who engage in this endeavour. It also reminds us of the dramatic effects that the European Union's isolationist policy has on people, and thus of the responsibility that we all bear as citizens of Europe.

[2] Requrements of the civil society movement Seebrücke for cities which join the the alliance “Cities of Safe Harbours” (German): https://seebruecke.org/wp-content/uploads/2019/01/Forderungen-Sicherer-Hafen.pdf