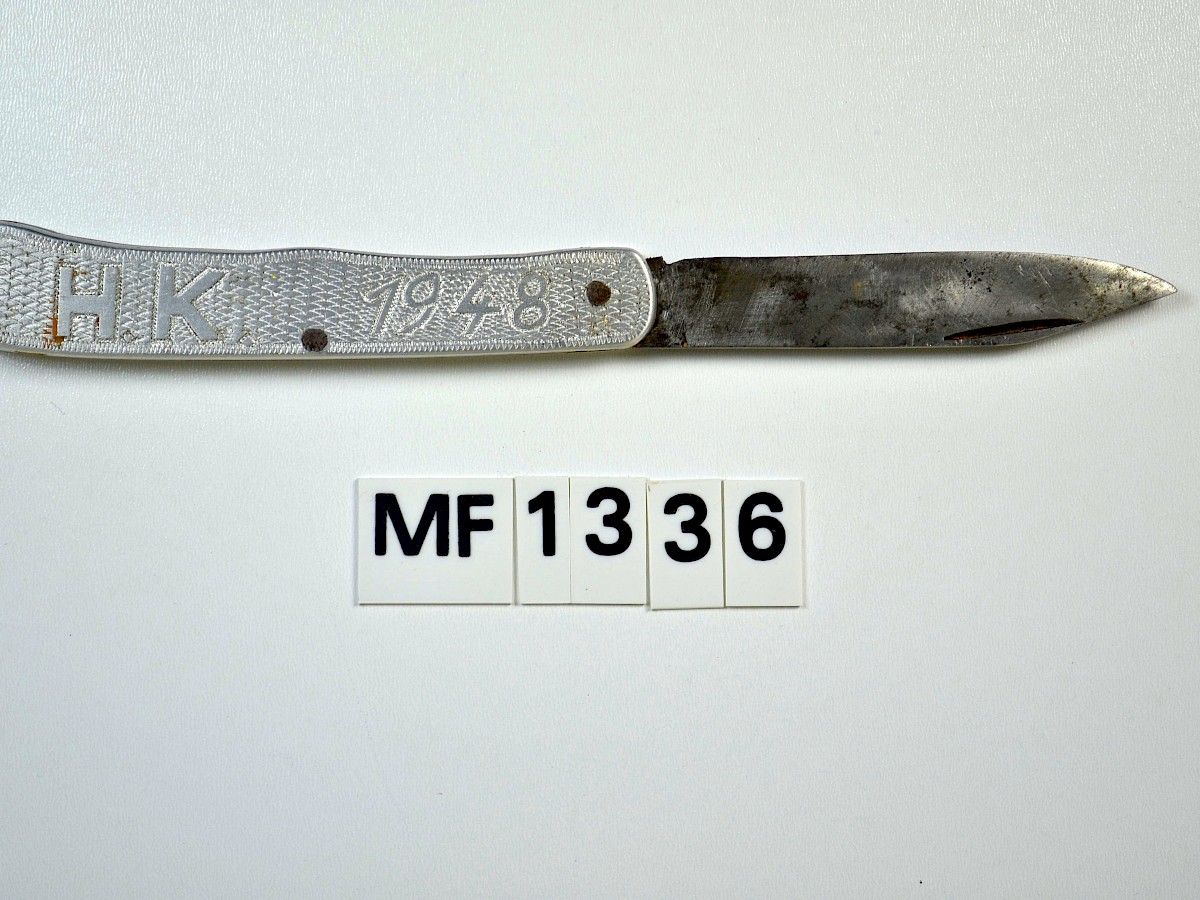 This pocketknife belonged to Heinrich Kröger, who received it in 1948 from a comrade during his imprisonment. It is made from aluminium and steel and the initials “H.K.” and the year “1948” were punched in the handle. The knife originated in Lublin (Poland).

The pocketknife is made from aluminium and steel and was manufactured in 1948. In the handle, the initials “H.K.” and the year “1948” are engraved. In 2014, Heinrich Kröger got into contact with the project Museum Friedland, which caught his attention via the press. The knife, together with a tobacco tin, was sent to the museum in April 2014 and added to the museum collection.

Heinrich Kröger was doing a commercial apprenticeship in his hometown of Hamburg when he was drafted into military service in 1943 at the age of 18. In spring 1945, he was taken as a prisoner of war by the Soviets in Poland. In October 1945, Kröger and about 1,000 other prisoners of war were handed over to Poland. He spent his imprisonment working in Poland until 1949, including two years on an agricultural estate near Lublin. After that he lived in a prison camp in barracks in Lublin for two years. In 1949, Kröger was released to West Germany with other prisoners. Through transport via Warsaw he reached Friedland, where he stayed for two days. Back in Hamburg, he initially lived with his parents before he could continue his apprenticeship at his old company.

The silver pocketknife triggers different associations in me. On the one hand, this knife is part of a greater number of objects in our museum collection. Various everyday objects were manufactured by prisoners of war themselves in the camps. These include metal boxes and cutlery, clothes and sometimes also very detailed and skillfully made jewelry. Accordingly, shoemakers, metalworkers and craftsmen of all kinds were important persons in camp life.

On the other hand, I picture vivid scenes from camp life and the stories connected to it. Hermann Günther and Karl Hampe got to know each other during their imprisonment in Ulyanovsk camp. These two relatively different characters remained friends even after their release, which was also due to their shared home village Jühnde (near Göttingen).

While the pocketknife of Heinrich Kröger was made by a comrade for him, Karl Hampe was a master smith himself. Besides his suitcase, he produced many metal objects of art, which he furnished with chased ornaments and figures. Even after his return from imprisonment Karl Hampe produced objects of art, which bear witness to his experiences during the Second World War. His friend Hermann Günther however found another way of expression. For a folkloric evening in Jühnde in 1955, he painted seven large-format pictures in one week, which carry a special quality. For although life in the camp was marked by hardship and austerity, the visual language of the painter shows a quiet humor. The figures are partly caricatural exaggerated and the horrors of daily life in the camp are rather implied in the details.

The pocketknife of Heinrich Kröger therefore represents to me a multitude of objects that highlight the everyday life during war imprisonment. Over the years spent in the camp, essential friendships (for survival), dependencies and networks formed, which afterwards influenced memories subjectively and were passed on within the families. While Kröger was seemingly able to continue his prior life after returning from war imprisonment, this says nothing about his inner mental state. The objects provide no information on this. [But] it becomes more visible in Hermann Günther’s artistic expression or also in Karl Hampe’s artisanal work.