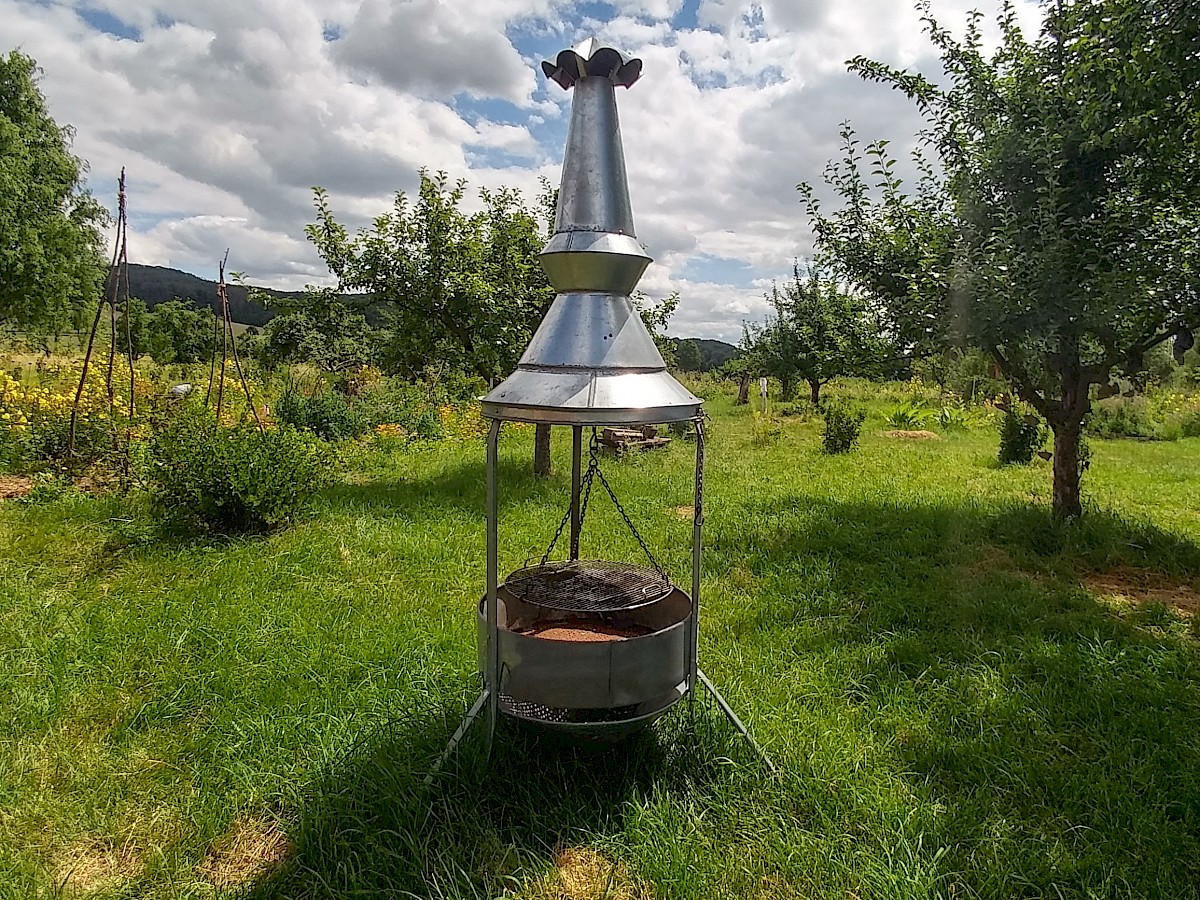 Late summer 2017: Family R. from Afghanistan reaches Friedland after about two and a half years on the run. Times in camps are always times of waiting, of living in transition and of not arriving. In order not to let this wear them down and not to give up hope, some refugees use their creativity to counteract the waiting and to strengthen their self-confidence. In the case of Rasul R., this was the construction of a barbecue, which is still used today in many activities in the FriedlandGarten.

Late summer 2017: Rasul R. and his family, wife and two children spent several weeks in the border transit camp Friedland. They learned about an intercultural meeting place from the social services of the State Reception Office and from flyers displayed in the border transit camp, which made the monotony of the days and the wait for the transfer more bearable for them: the FriedlandGarten. Here people work, harvest, celebrate and talk together. One day, a newly built clay oven came into use there and Rasul noticed how much it smoked. Spontaneously he had an idea: "I can do that better. I'll build you a stove that draws better," he announced. And so he began to make a communal grill from 3x2-meter sheets of V2A-density stainless steel using the simplest of means. Rasul did not make a drawing beforehand; he had the design in his head.

The Afghan learned the imagination and skill of furnace construction from his father as a child. In his home country, Rasul was employed in a car repair shop, where he was responsible for metalwork and repairs to the bodywork of cars. Even there, he never had many tools at his disposal. And so he built a grill, a kebab bowl and a large water kettle for future users of the garden in the intercultural community garden in Friedland with the simplest of means and above all with his own hands. To build the objects, he used only two hammers of different sizes, a pair of tin snips, and his hands, with which he folded the parts together. A wooden block with a thick hammer head on it served as a makeshift workbench. For the few screws, he used a cordless screwdriver. The material costs totaled 160 euros. Some necessary small parts could be rescued from the scrap container, including a perforated plate for the kebab bowl. The tools were gathered from private households and made available to him. The barbecue was created within two weeks. The long chimney allows the smoke to escape particularly well. To this day, it is in use in the FriedlandGarten and impresses users with the great precision with which it was made. The construction of the barbecue gave Rasul the certainty of doing something meaningful and useful for his family, friends or visitors to the garden. For Rasul, making something with his hands and providing it to others means developing or regaining a sense of self-esteem and pride.

Meanwhile, the family lives in a small village in Emsland. Here, Rasul has built an outdoor oven for himself and his family, as well as a samovar that he constructed from a piece of aluminum found in the trash. He has also made a water cooler, much admired by the neighbors, from a broken extractor hood, which lowers the room temperature on hot days. While his eleven-year-old son now attends regular school - his daughter is only two years old - he and his wife are learning German. Rasul had the opportunity to do an internship at the car repair shop in the village; longer-term employment was not possible. He would be very happy if he could use his hands again for a meaningful activity and have a job similar to the one in his home country.

After fleeing Afghanistan in 2015 and staying briefly with relatives in Iran, arriving via Turkey and Greece, the R. family lived in a refugee camp in Denmark for two years.