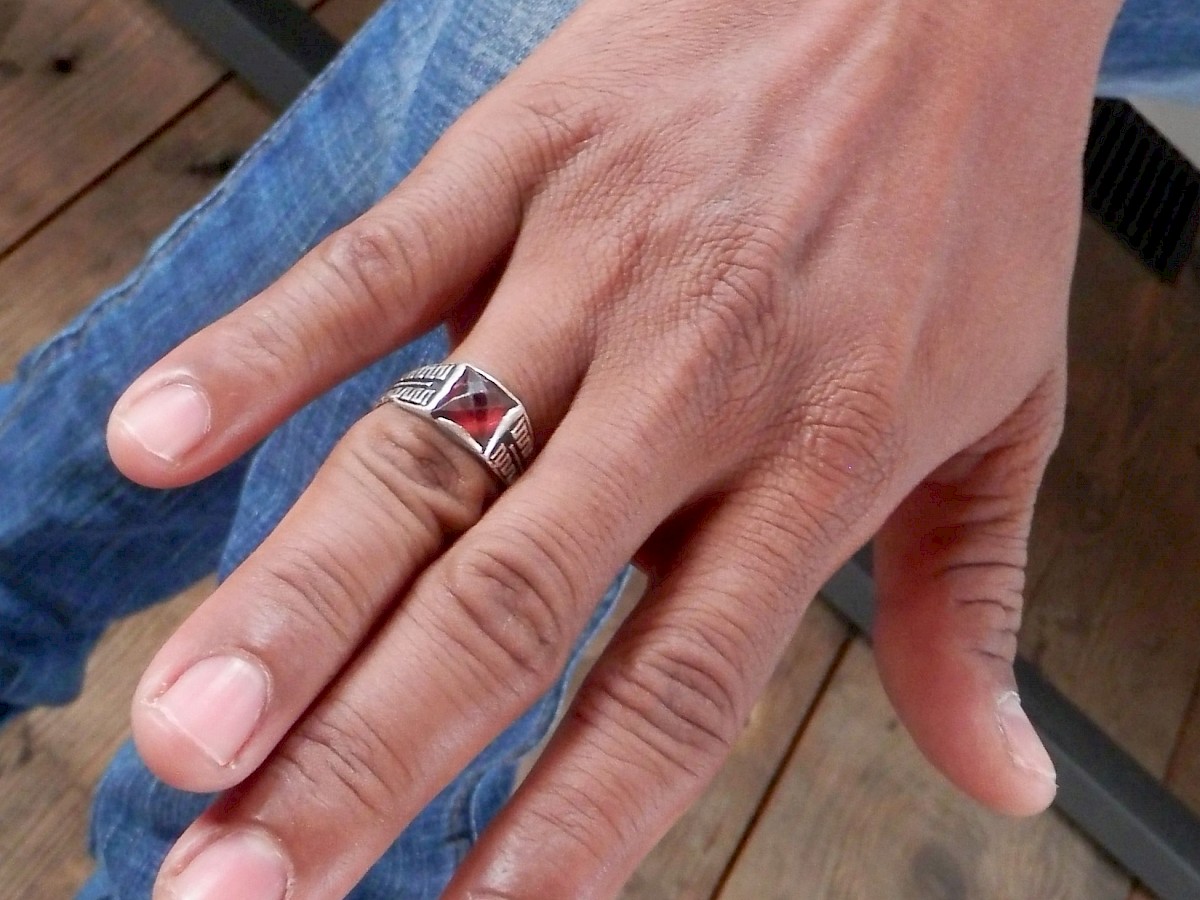 What do memorabilia mean for people who have left their home country because of the harshness of the state, social mistrust, and individual lack of perspective? Who have fled illegally from one country to another during a period of four years, been in jail and in various refugee camps at times, and have lost everything but a ring? What power do such memorabilia develop for the wearer and what meaning is attributed to them?

H. A., a 27 year old trained painter and mason, is from Eritrea. Like many of his compatriots, he left Eritrea in 2014 because of the mandatory national service, the economically desolate situation of the country and the arbitrary state rule (see SFH Bern 2017). His escape route took him to Libya along several stops in Sudan. He needed the help of smugglers to cross the border. He ended up in a refugee camp in Niger, where he registered for the UNHCR Resettlement Program. In October 2018 he finally arrived at the Friedland Transit Camp. During the four-year journey, he lived on the streets or in refugee camps, at times he was in prison. How he managed this time financially did not come up in our conversations.

The only item that H. A. was able to save from his homeland is a ring. During our conversation, he pulls it out of his pocket and puts it on his right index finger: "Look, this ring is broken and in the meantime it has become as tired as me, we faced all the problems on our way together."

His statement that the ring is now as broken and tired as he himself is clearly reflects the emotional state of H. A.: After four years on the run, traveling illegally, far away from his family, mostly alone and repeatedly dependent on the help of other people, he feels worn out, broken, and powerless. The months he spent in Libya were a particularly difficult experience, "because every person has a weapon and even the children kill you."

Magnus Treiber (2017: 156) describes these moments that Eritrean refugees experience as a "complex dilemma", because illegal flight means permanent insecurity instead of security, restlessness rather than rest, mistrust towards almost all people instead of trust, and the constant danger and knowledge of being helplessly exposed to smugglers, the police etc. These experiences, which last years in some cases, as well as patterns of behavior developed in times of uncertainty, make the arrival and integration in Germany difficult for Eritrean refugees.

The Iranian social scientist Sharam Koshravi, who himself had been on the run illegally fleeing for many years, writes: "'illegal' migration can mean a lifelong separation from family, friends, home. It is a journey of adversity, peril, deterioration, physical pain and tears. It is a journey of indefinite route, length, cost and destination. You do not know what to expect and no one expects you! "(Koshravi 2010: 14).

For H. A. it is finally time to arrive. The ring is the only and last connection to his wife and the daughter he has not yet met. The ring is a very special object, and of paramount significance to him: His wife had worn it as a wedding ring on her right index finger, and now his experiences and challenges during his flight are inscribed in it. An object linked to the hope of the subsequent immigration of his wife and daughter. Will they succeed?