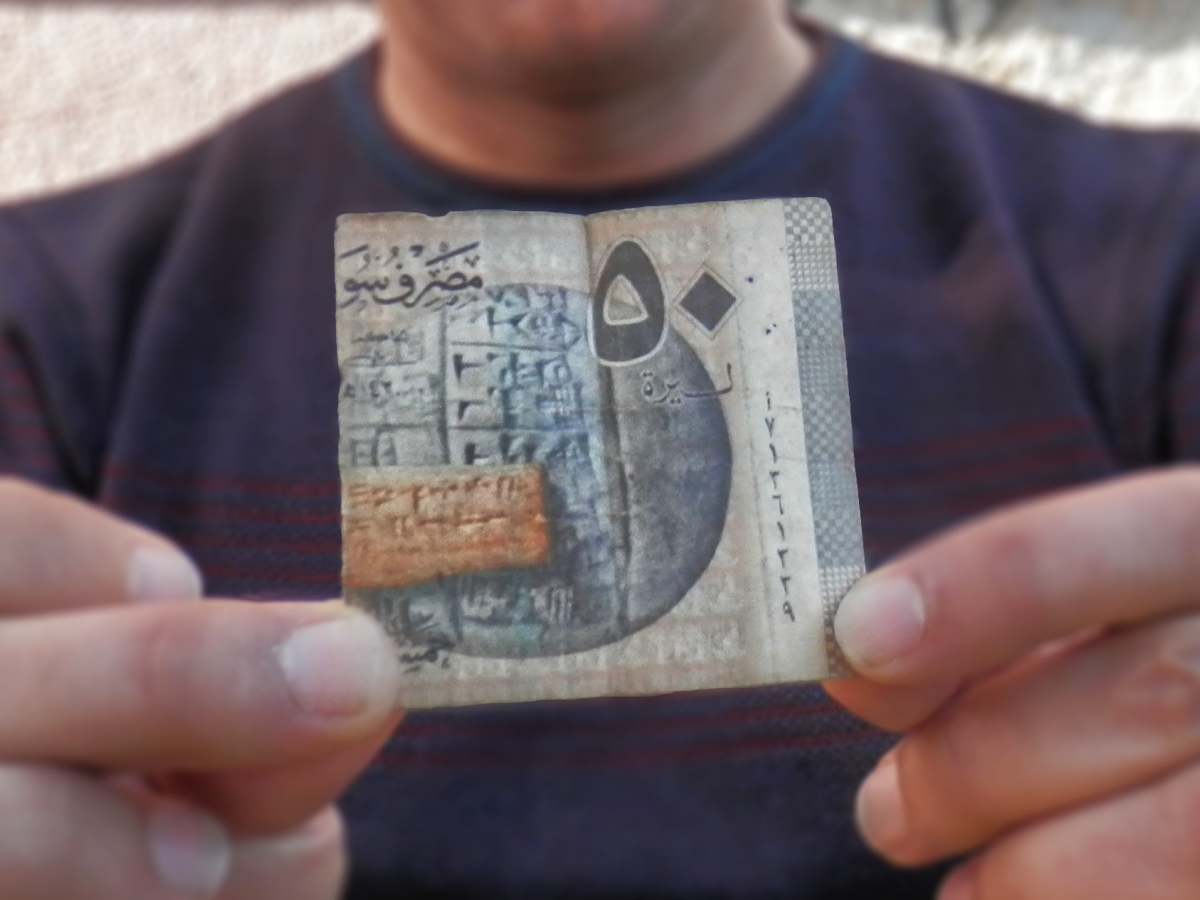 A shredded Syrian 50 Lira note, of low financial, but high emotional value for mother and son of the K. family. Both have been carrying this note with them for four years. A banknote as torn as the family, connected with the hope to grow together again to a whole, to reunite.

The K. Family – The Torn Banknote

The arrival of the K. family from Syria in Berlin in October 2018 marks the last stage of a four-year period of life in transition. Father, mother and four children aged 2, 10, 15 and 16. The photo, which Mr. K. sends to us via mobile phone, shows various items on the desk of their new home. The family lives in a refugee home, in their own small apartment with bathroom and kitchen. This corner, part of one of the rooms in the apartment that he himself has furnished, is very special for him: In the foreground there are two illustrated dictionaries for learning the language, the titles of the books piled up in the background cannot be read. In contrast, the German flag and the computer are very centrally positioned. Mr. K. recorded the interview that we conducted in Friedland on this computer and keeps pictures on it of the family estate in Aleppo from before and after its destruction. On the wall in the background, there is a drawing he made of house no. 43 in the Friedland Transit Camp, where the family had stayed for some time, as well as postcards with quotes from other refugees in Arabic from the Friedland Museum, on which they formulate their impressions of the transit camp in short sentences.

The home of the K. family: a district in Aleppo, not quite in the city centre, a piece of land that has been the family’s property for many years. Together with the siblings of Mr. K., their wives and children as well as their parents, they lived and worked together in a large house. On the upper floor of the estate there are five apartments for the large family, while the ground floor houses the work and sales rooms of the family-owned textile factory. This house was completely destroyed in 2013. From the ruins, Mr. K. has saved some everyday items such as kitchen utensils and clothing, but all documents and papers were burned beyond recovery.

During one of the numerous air raids, Mr. K.'s mother was not at home. Her absence at that moment and her forthcoming trip to a daughter in the United Arab Emirates brought him to an emotional turning point and he felt as if he would "never again in his life be able to see his mother". This was the reason for tearing a Syrian banknote of small value into two parts, giving one half to the mother while keeping the other half for himself, carrying it with him at all times. This gesture was connected with the hope that one day both halves might become a complete whole again, a note with little financial but very high emotional value for this family.