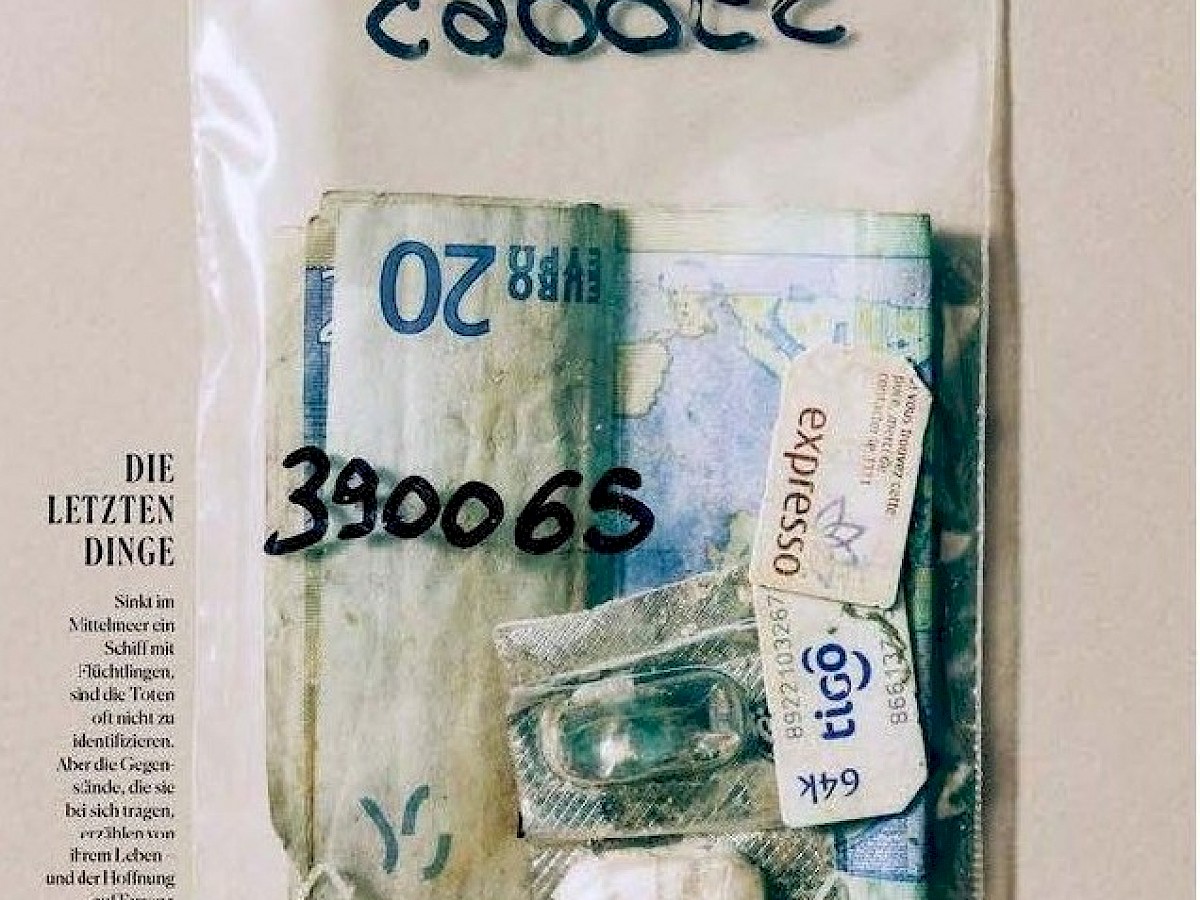 On the 18th of April 2015, a boating accident in the Mediterranean Sea presumably killed up to 800 people. The boat was on its way from Libya to Italy. The journalist Margherita Bettoni reports in an article for the Sueddeutsche Zeitung Magazin about the work of a Milanese forensic scientist who examined both the bodies and the objects of the drowned fugitives. An interview about the direct language of materiality and its effect.

About the immediacy of things. How possessions of unidentified refugees drowned in the Mediterranean Sea can speak.

Friedemann Yi-Neumann: Ms. Bettoni, on the 17th of May, a report was published in the Sueddeutsche Zeitung Magazin about the belongings of fugitives who died in a boat accident in the Mediterranean in 2015. I would like to ask you to comment briefly on the background of this research project.

Margherita Bettoni: The project is not strictly a reportage, but rather a series of pictures with a preceding text. It's not a reportage because, as one of the text authors, I wasn't at the scene itself, but talked to the forensic expert Cristina Cattaneo, who is responsible for these objects.

But back to your question about how the project came about: The editorial staff of the SZ-Magazin, in particular, the assistant editor-in-chief Lara Fritzsche, who co-wrote the text, had the idea of publishing something about Cattaneo's work. The editors knew that the forensic scientist from Milan had handled the identification of the dead in major shipping accidents. And that she also cataloged the objects that were found on the bodies or in the ship and archived them in her laboratory. As a result, the editors decided to get in contact with the idea of viewing these objects. As an Italian-speaking journalist, I became part of the team.

FYN: What can you say about the boat from which the objects originate?

MB: It is a fishing boat that capsized in the Mediterranean on the 18th of April 2015. The boat took off from the Libyan coast and unfortunately sank in the Mediterranean. There was a rescue attempt by another boat, but the ship still capsized. There were only twenty-eight survivors, including the smugglers. We don't know the exact number of casualties, but the forensics team was able to say with certainty that there were 600 people on board. Cristina Cattaneo assumes that between 600 to 800 people were on board, based, among other things, on the statements of survivors. This was the ship accident with the highest casualty rate in the Mediterranean. In July 2016, the ship was recovered from the seabed under the government of Matteo Renzi. The forensic team analyzed the human remains that could still be recovered.

FYN: What your article tells us is that on the one hand there are these forensic investigations, the attempts to classify these things, e.g. SIM cards, where it can at least be estimated where they originate from. On the other hand, there is very little information about these objects. Nevertheless, these object images are compelling. What are the reactions to your reportage?

MB: I have received feedback from people around me, from friends who have read the article. Many have said that they felt the influence of the objects. One friend told me that she was moved to tears because these objects were speaking to her. I also believe in the symbolic power of things. Stupid as it may sound, some people can identify more with objects than with the people who have drowned. Of course, most are affected when they see pictures of drowned people. But many think, "They look different, I can't feel a connection to this person." Objects, on the other hand, are something commonplace, they affect differently.

FYN: So one can summarize that things, at best, can act as an empathic bridge capable of overcoming various forms of racism and other prejudices, at least to some extent?

MB: I would definitely say that, yes.

FYN: The objects have now been cataloged and entered into the archives of Milan Forensics. What happens to these objects now?

MB: Cristina Cattaneo, from the University of Milan, is the director of a laboratory called LABANOF (Laboratorio di Antropologia e Odontologia Forense). She and her team, led by the Extraordinary Commission for Disappeared People of the Italian Ministry of the Interior, examined the bodies and the remains. In the case of many of the drowned, hardly anything commemorates the people they had once been. Often only a large number of bones remain, and in the cases where there were objects, they were collected. Some of the objects were directly on the corpses, others lay loose within the ship. Then the forensics team collects these postmortem data. This means that all kinds of data, which could help identify the people are collected, data that shows that a person was limping based on an examination of the bones. And, of course, objects can also help to identify people.

These objects are lifted, cleaned and dried so that they are cataloged in good condition. The objects are then numbered. If they were on a person, they get an abbreviation PM, which stands for postmortem, and also the number that was assigned to the person. If this is not the case, objects are simply tagged with a number and an abbreviation for the place in the ship where they were found: on deck, front or back, and so on. The approximately 1100 objects of the 2015 shipwreck are stored in the archive of the previously mentioned LABANOF. The objects from other ship accidents are handled differently; they are archived at the responsible public prosecutor's office. If, for example, accidents occur near Sicily, the objects end up at the public prosecutor's office in Catania.

FYN: Do you know whether the information that is collected about these objects is also used to inform next of kin?

MB: That is the difficulty of this work. There are two different forms of data for identifying dead bodies: the postmortem data, which is compiled by forensic scientists, and the antemortem data. This data can actually only be given by next of kin. These are things like when a relative says, "He was limping his right leg" or "He had lost two teeth." Or specific information such as the name, surname, etc. Only if there is a match between antemortem and postmortem data can you identify a person; this is a big challenge.

Cristina Cattaneo said the team is also working in cooperation with the International Red Cross. The aim is to make families in the respective countries of origin aware that there is someone in Europe who is trying to identify these dead. To be successful, relatives should provide DNA samples and other antemortem data. The postmortem data collected by forensics remains in the Mediterranean countries, where the bodies of the drowned victims are examined. The antemortem data comes from the countries of origin or from the countries where the relatives are currently residing. This is often Northern Europe because people migrate to Germany, Sweden, or Denmark.

Some family members come to Milan to identify their relatives. In this case, objects play an important role. For example, the recognition of handwriting or a telephone number on a document can lead to the identification of a person. But it is not enough to recognize objects alone. Rather, as mentioned above, there must be a match between the two forms of data (ante- and postmortem).

Informing next of kin is not only important to have certainty about the death of a family member and to be able to accept it. There are also legal and bureaucratic procedures in which the identification is of enormous importance. I remember the story of an African child told by Cristina Cattaneo. This child could not come to Europe because nothing was known about the whereabouts of his parents. Because such data was missing, it could not be officially proven that the child was an orphan. Therefore, it is all the more important to identify these people. Until now, only two people have just recently been identified from the 2015 shipwreck, even though the bodies had already been recovered in 2016.

FYI: That's exactly what I was getting at. You've recovered so many things, and there is so little information and then maybe a photo gallery like yours is another form of giving relevance to this subject. With regard to what is happening politically in the EU and at the European external borders at the moment, what kind of answer could the examination of human remains and objects provide in order to open up new perspectives?

MB: I think it's essential to give the dead an identity, and that happens, among other things, through the objects. But I also find that showing objects plays a vital role. It becomes more difficult for people to turn away. When you hear in the news that 800 people have lost their lives, there is a large proportion of people who are already very shocked regarding our politics. But others merely perceive the number and forget the human dimension of the whole. Many do not think actively about how many people have already drowned in the Mediterranean. Showing objects is another way of drawing attention to what actually happened.

When so many people arrived in Germany in 2015/16, refugees became the focus of the reports. Migration has been an issue ever since. As a journalist, I find it important to constantly consider new ways of dealing with this topic, which is absolutely relevant. And to do so in a way that also manages to take along those readers who otherwise have the feeling: "Not again - another article about migration". And in my opinion, this is precisely the challenge of the research, to manage to convey the importance of this topic.

Cristina Cattaneo, the forensic expert, described impressively that it becomes more difficult for people to look away when they see a child's football jersey or basketball gloves. Such things directly insinuate: "That could have been my child." Objects can serve to sensitize people and help them to understand the tragedy that has taken place and that, in view of current political decisions, will perhaps occur even more frequently in the future. My hope is that this is a way to contribute to change.

FYN: Ms. Bettoni, thank you very much for these fascinating insights into your work.