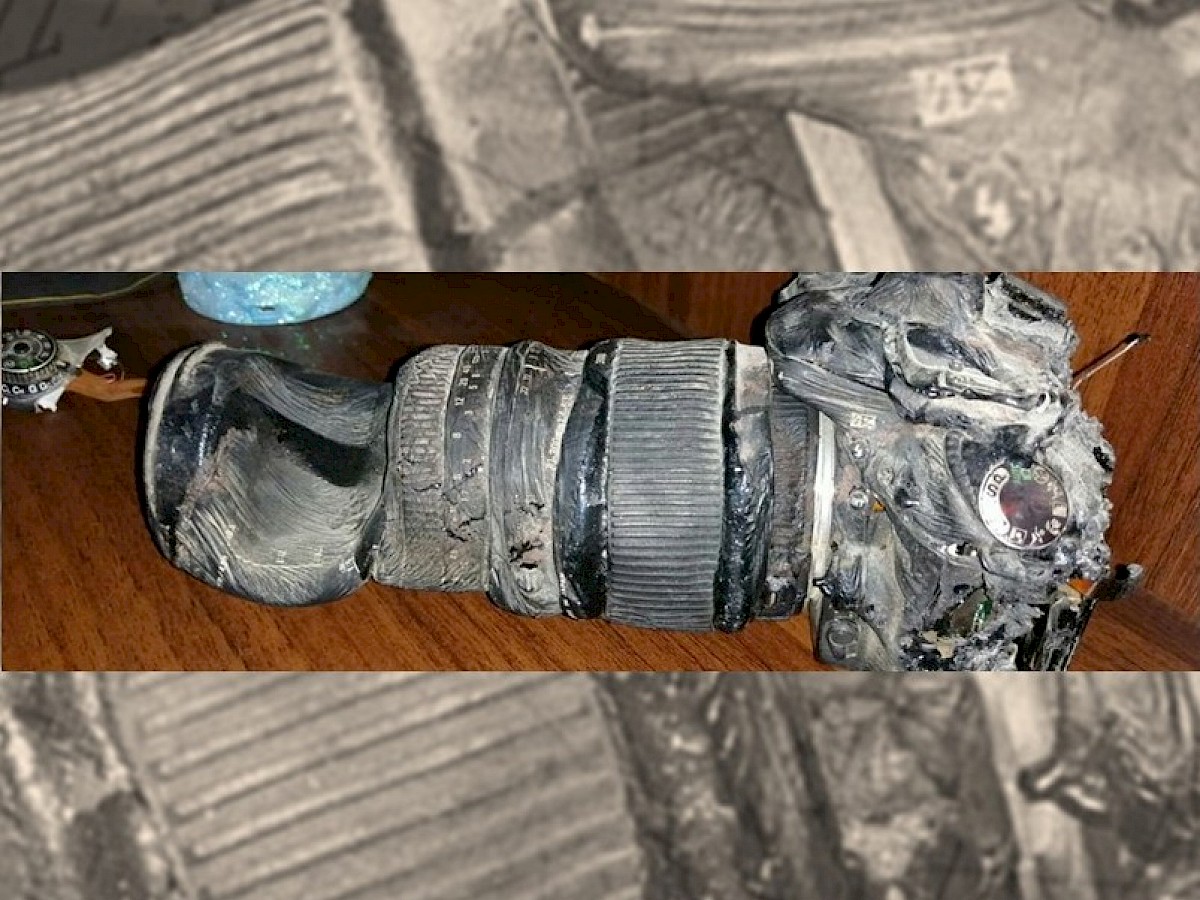 This camera (a Nikon D90) belonged to the Kurdish-Syrian journalist Dilîşan Îbiş, who was killed by a car bomb planted by ISIL in Deir ez-Zor in 2017. In a guest article, her friend and colleague, Hoşeng Hesen, describes her life and the challenges faced by journalists in north-eastern Syria.

This article is an external contribution to this website, submitted by Hoşeng Hesen, a Kurdish-Syrian journalist from Qamişlo. A picture of Dilîşan Îbiş’ destroyed camera which was posted on Twitter spurred the interest of the project team.

Hoşeng Hesen describes the emotions and experiences he associates with the camera: The violence of the Syrian civil war, the very personal experiences of loss through the death of a colleague and close friend, and the dangers, challenges and everyday difficulties of journalistic work in Syria. However, the contribution is simultaneously an expression of hope and of a great willingness to do everything in one's power for a future peaceful, self-determined life in a democratic and pluralistic society[i]. Last but not least, this contribution wants to give the dead and their belongings the place they deserve.

Hoşeng Hesen's contribution reflects the perspective of a personally and politically involved insider. This led to some discussions within the project team, as the text differs in character from the fundamental ethnographic orientation of the website. One of the controversial issues discussed was whether an object which, at first glance, has nothing to do with the materiality of flight and migration should be placed on this website. It was also debated whether the pathos-laden style and intention of the text move the focus away from the object and rather serve as a kind of martyr's memorial for Dilîşan Îbiş.

Hesen's contribution was nevertheless received as a valuable contribution to this project, as a current voice from the diverse mosaic of voices in the war-torn country.

Sadly, the concerns Hoşeng Hesen voiced in his article regarding a Turkish invasion of north-eastern Syria came true in October 2019. The Turkish army and allied Islamist militias conquered parts of Rojava in the course of an alleged counter-terrorism campaign. According to Amnesty International, 300.000 people were displaced and more than 200 civilians were killed by attacks. There have also been numerous executions of unarmed citizens, like the one of Kurdish politician Hevrin Khalaf. Moreover, civilians have been abducted and tortured by invading forces.[ii]

These dire developments threaten the only project of democratic self-administration in Syria. And in the wake of this offensive, the so-called- Islamic State has already regrouped again.

The life and death of the Syrian journalist Dilîşan Îbiş

The night was dark, Dilîşan wanted to brighten it up with a child’s laugh but did not know that the power of darkness would put an end to her life.

Dilîşan Îbis was born in 1991 in the city of Kobanê. The name Kobanê is directly connected with the memory of failure and victory over the so-called Islamic state. Every person loves their country, but if there is oppression in one’s homeland this love grows immeasurably. When the revolution started in Rojava (Western Kurdistan/Northern Syria), she returned to her city, even though she was studying economic management in Aleppo at that time. After waiting for years, the time had come for her to realize her dream of working as a journalist.

Together with a few friends, Dilîşan founded Radio Dengê Kobanê (The voice of Kobanê). But during an ISIL-issued attack on Kobanê, the radio building was destroyed in an explosion and Dilîşan had to leave the city. After the city’s liberation, Dilîşan and her friend built a new radio station on the ruins of the old building with the help of donations. Her voice was once again heard in Kobanê.

Afterwards, Dilîşan started working for the Hawar News Agency (ANHA). There, she wrote and published news articles in Kurdish, her mother tongue. When the forces of the QSD (Syrian Democratic Forces) started their last operation against ISIL in Deir ez-Zor, Dilîşan went there with two of her colleagues from the Hawar Agency.

On the night of October 12, 2017, many civilians fled areas claimed by ISIL and finally reached the QSD positions. Dilîşan wanted to document this with her camera and approached people to capture and express their joy about the liberation from ISIL through photography. But half an hour after they arrived there, ISIL attacked the civilians, among them Dilîşan, her friends and many children, with a car bomb. The night and the car were the last things that Dilîşan saw. She, her two colleagues and dozens of civilians died in the attack. All that was left was a burned camera containing photos of children.

Since we were work colleagues, I posted the photo of the camera on my Twitter account and every time I look at it, I remember Dilîşan and gain new strength and motivation to continue my work.

Because the Syrian regime had all press platforms under its control, Kurds had no right to their own platform. This was only granted to them through the revolution. With this foundation, the dream the Kurds had cherished for years became true. April 22nd was set as a press day, as it commemorates the first Kurdish newspaper (which was called Kurdistan) published in Cairo on April 22nd, 1898.

At the start of a new project there are always thousands of difficulties and obstacles, but it is at least twice as difficult when there is war at home. I am currently working at Ronahî TV, the first Kurdish television station in Rojava. We order all our equipment from abroad, and if it is larger equipment, it gets stuck at the border for years, because the neighboring countries (Turkey, and the Kurdistan Autonomous Region in northern Iraq) do not let the equipment through to Rojava.

We are still missing many things. For example, it’s been five years since I started to cover the fight against ISIL journalistically, but I haven’t yet received any self-defense strategies or first-aid courses, and most of the journalists who work here don’t have such things either. [iii]

There is one day in 2015 that I will never forget. It was the day of the QDS operation against ISIL in the city of Al-Haul. We had gotten lost three times that day, were only a few meters away from ISIL fighters, and almost landed on Caliphate territory. We knew that they would behead us if we were caught, like so many others before. But luckily, some civilians had given us directions we found the right way. Journalists in war zones are often driven back and forth on a military vehicle. But you can never be certain that a grenade won’t find its target and explode, leaving you to find a similar end as Dilîşan.

For me, Dilîşan and hundreds of others who work as journalists in Rojava, there are many reasons why we do this. But in general, there are two motives that are particularly important:

First and foremost, our long-cherished dream is coming true here and now: we are able and allowed to express ourselves in Kurdish on a press platform. We have not forgotten the cruelty and violence perpetrated by the Syrian regime against us and our language. In the past, speaking Kurdish was grounds enough for a long prison sentence.

Secondly, it was the first time that our country was liberated. To experience our homeland in this way is an indescribable joy for very many Kurds. We want to show this beauty to the whole world!

Of course, the development of our work and our country is far from complete. The voices of weapons and war are still being heard. For the sake of my work I hope that the war will end soon, and that I will get a chance to develop myself into the media sector. Although I have already learned much and was honored as the best journalist in Rojava this year, I believe that I need to work on myself even more.

In general, I am optimistic for Rojava and hope, that our Situation will improve continuously. But the attacks of the Turkish state in particular continue to pose a threat to me and the people in the region. For example, they have announced that they will occupy our territories, just as they have done with the Canton and the City of Afrin.

I would like to see a museum for Dilîşans camera and for many other objects of journalistic equipment destroyed in the war, so that they and the people and stories connected with them are never forgotten.

Finally, I would like to thank this project for the appreciation of Rojava and my work.

It is my wish that everyone can participate in this living project.

Hoşeng Hesen (translation from the Kurdish to Germany by Sîlva Oso)

[i] Various Kurdish, Arab, Turkmen, Circassian, Aramaic, and Syriac groups live together in Rojava. This is also reflected in the political-administrative structures of the Democratic Federation of Northern Syria (DFNS). Rojava’s social contract, (see http://civaka-azad.org/der-gesellschaftsvertrag-der-demokratischen-foederation-von-nordsyrien/) declares equal rights for women, freedom of religion and the abolition of the death penalty.

[iii] According to the NGO Reporters Without Borders, Syria ranks 174th out of 180 in the freedom of press rankings, making it one of the most dangerous countries for journalists. The Assad regime and armed Islamist groups systematically persecute, threaten and kill media workers (https://rsf.org/en/syria [12.28.2019]).