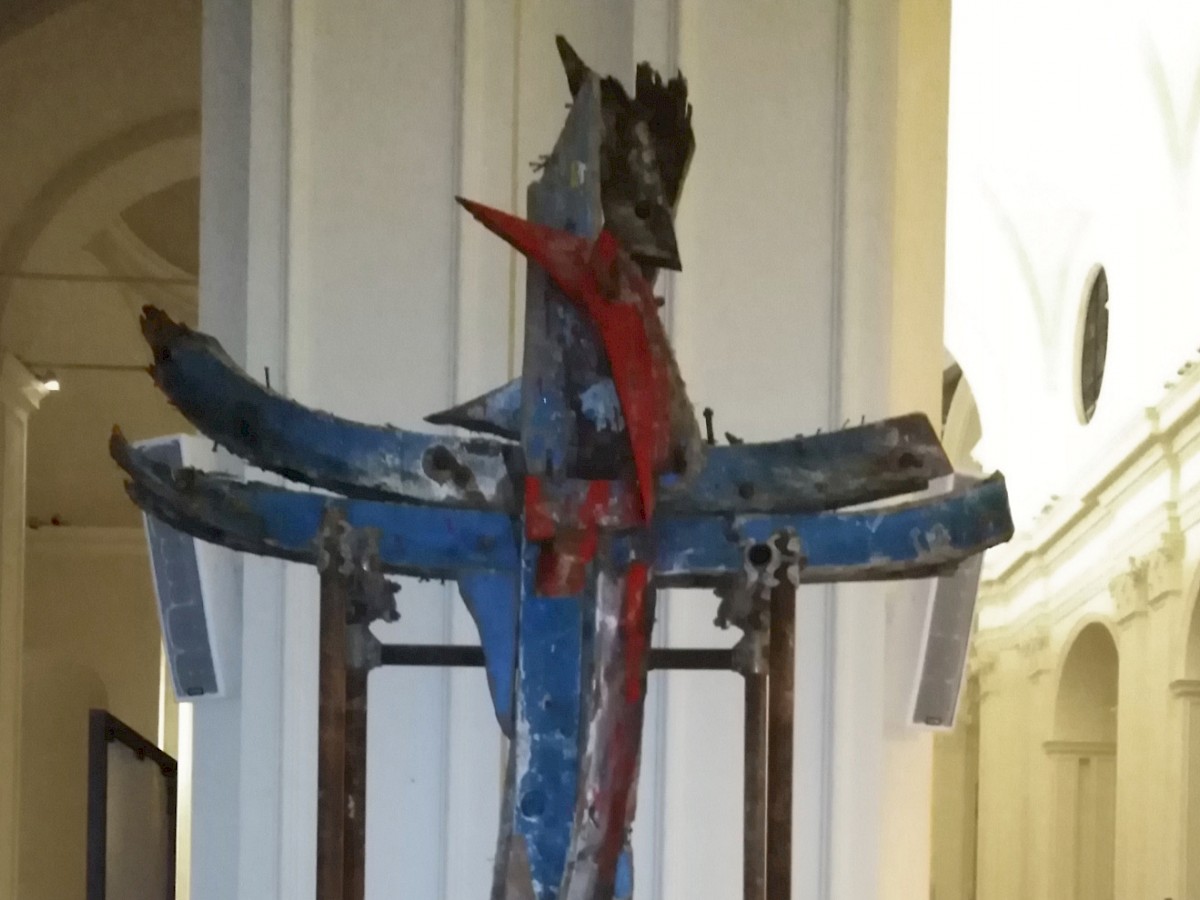 A cross made out of refugee boats

In the Cathedral of Noto (Sicily) there is a cross, 4.60 meters high, weighing about four and a half tons. This cross was created by an Italian artist from the remains of refugee boats stranded on the southeast coast of Sicily. What is the significance of the cross in this specific place on the Italian island of Sicily?

A cross made out of refugee boats

In April 2019, my husband and I visited the Cathedral in Noto, Sicily. Immediately upon entering, set up in plain view, we noticed the large cross made of wood and iron. The wood is heavily weathered, some pieces are broken or splintered, long rusty nails were left in some parts of the wreckage. Due to the height of a good four and a half meters, the unusual color scheme in blue and red, as well as the material and shape, it was impossible to miss.

The description on the cross indicated that it was made by Elia Li Gioi, an Italian artist, from the remains of stranded refugee boats on the southeast coast of Sicily. Originally, the cross was built for a visit by Pope Francis to Palermo on Sept. 15, 2018. Commenting on his motivation, the artist said in an interview in Palermo Today, "I recovered the remains of refugee boats stranded on the southeast coast of Sicily. The issue of immigration is a very important issue for Pope Francis. Although I recovered the wreckage, the cross arose by itself." [1]

The artist's idea was to create a symbol of "peace and solidarity". Peace that would make the flight of many people from their home countries unnecessary, and solidarity in memory of the many dead refugees who have died "in the biggest grave in the world" [2], the Mediterranean. It is to remind of the numerous failed escape attempts, of the often far too small and completely overcrowded refugee boats and the associated high danger to life, and of the countless refugees who remain in the country illegally.

According to the UN, more than 5,000 people drowned in the Mediterranean Sea in 2016. In 2017, more than 3,100 refugees died or disappeared, according to the United Nations Refugee Agency (UNHCR); in 2018, there were more than 2,300 deaths and disappearances, and in the first half of 2019, 669 people already met their deaths in the Mediterranean. Even though the number of arrivals via the Mediterranean route has dropped sharply since 2015/2016, this route remains the deadliest sea route in the world [3] and is becoming increasingly dangerous. Thus, the current situation in the Mediterranean Sea between Libya and Italy is also worsening as a result of the harsh course of Italy's right-wing populist Interior Minister Salvini. According to ZDF Heute on July 2, 2019, "On the way from Libya to Italy and Malta, one in fifteen people died in 2018. So far this year, 2,755 people arrived in Italy and 1,048 in Malta. 341 migrants died on the way there." "This means that on the Libya-Italy route, one in eleven migrants and refugees die," explains UNHCR's Melzer. [4]

In view of these figures and due to the fact, that remains of sunken refugee boats land off the coast of Sicily again and again, I understand the cross in the Cathedral of Noto as a memorial. Through its public presence, it should remind us of the refugees to whom the dangers of crossing the Mediterranean seem less than the threat and hopelessness in their home countries. The cross as a Christian symbol could have an even broader meaning here: With the cross, the artist refers to the death of the refugees, the placement in the cathedral symbolizes the surrender of the dead of the Mediterranean Sea into the grace of God.

Despite several attempts, it was not possible to get in touch with the artist. It would have been interesting to learn what he wants to express with the statement "but the cross arose by itself". Unfortunately, this question must remain unanswered.

Noto, Sizilien
The Inflatable Boat
Lagerszenen
The Misbaha
The Broken Ring
Notice of Rejection
The vinyl record
Documents of the Undocumented
Dilîşan's Camera
High-visibility reflection vests
About the value of the title deed
Objects as Means of Motivation
Audio cassette from Iran
Open
Archive