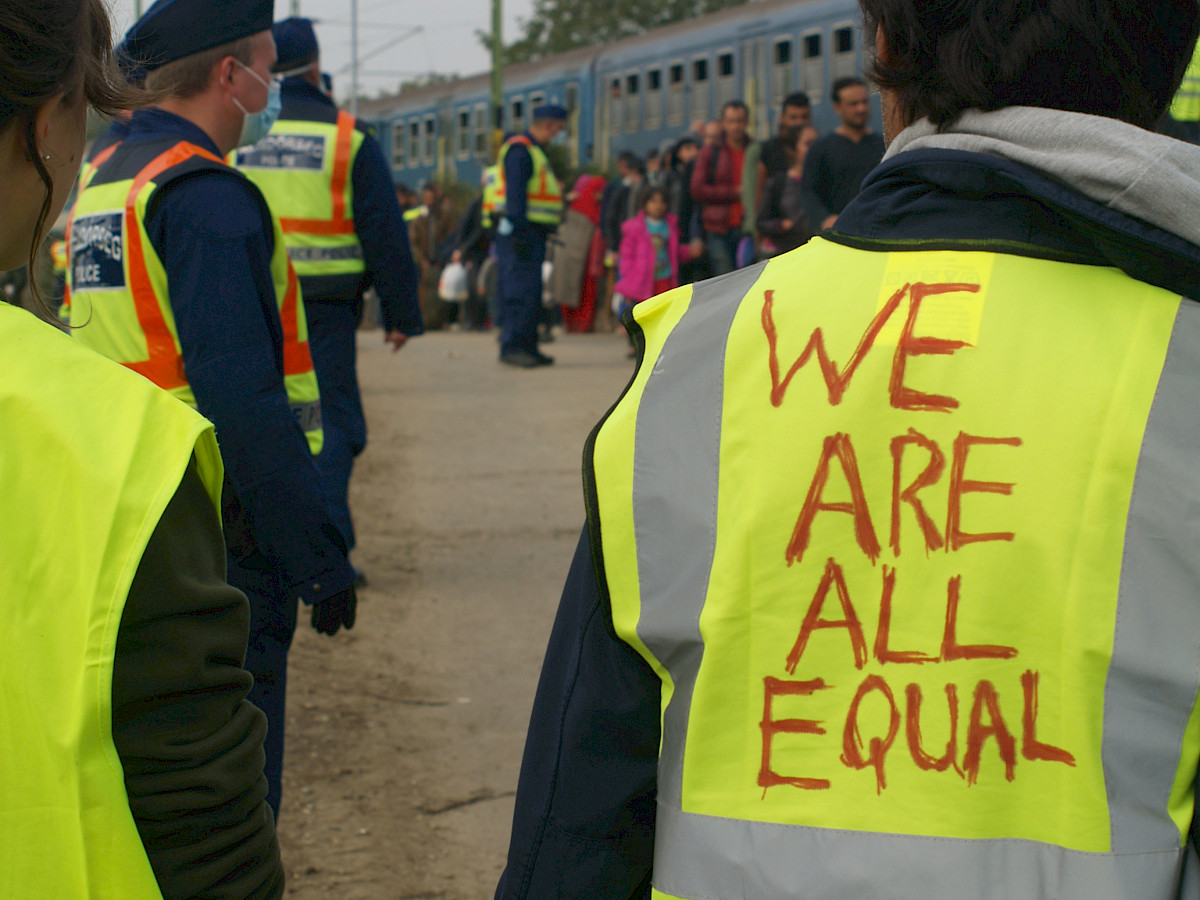 Signal vests are ubiquitous on the escape routes to Europe. They signal danger, order, help; they organize the movement of refugees and reflect power relations. The ethnologist Ignacio Fradejas-García witnessed these functions when he accompanied refugees on the Croatian-Hungarian border in autumn 2015.

On this journey I witnessed the power of different reflection vests. Reflection vests were ever-present at border crossings or refugee centres. Yellow, blue, red… sending out several messages through their various logos, words, and sentences: PRESS, Red Cross, Caritas, translator Arab-German or Police. All in different languages, typographies and graphics, clarifying the power invested in the person wearing the vest.

I joined a group of refugees when they got off the train on the Croatian side of the border with Hungary. We were quickly guided onwards, following the instructions of different local people with reflection vests: Croatian policer officers, railway workers, ambulance personnel, Red Cross volunteers. Finally, we were met by militarised police officers on the Hungarian side, also wearing high-visibility reflection vests, concealing their camouflage suits for the occasion.

The long queue of refugees continued across a foot-bridge before being guided through a door in a high and long razor-wire-fence marking the national border between Croatia and Hungary. A translator with a yellow vest explained in Arabic through a megaphone that the humanitarian corridor was still open, and that all the refugees in the group were to take a free train across Hungary until the Austrian border. No identification was required; the entire group was socially invisible. Before the refugees got on the new train in this new country, a group of volunteers, also wearing reflection vests, humanized the place with some words of welcome and good-hearted greetings. I stepped out of the group to take some photos one of which featured a volunteer with the words “WE ARE ALL EQUAL” written on his vest. As always, I was trying to make sure that the refugees visible in the picture were out of focus, protecting their invisible social status by making them unrecognisable.

After stepping out of the refugee group to take photographs it was not long until a police officer asked me what I was doing there. I did not belong; having left the group of refugees I was now the only one standing on the outside without a reflection vest that would have legitimated my presence. My camera had protected me for a few minutes, but I did not have a press vest. We anthropologists do not wear reflection vests! The police stopped me temporarily, but after their threats and my explanations, where I was made to assert my rights and status as a EU citizen, I was finally able to recover my privileged capacity to be (in)visible, and continue the journey.

During my travels with the refugees I quickly became aware of anonymous volunteers and their collective efforts to support refugees passing their localities. In 2015, with the so called ‘refugee crisis’ becoming a focus of the mass media, these volunteers were suddenly much more visible. They complained about the criminalization of their humanitarian work and the lack of coordination, cooperation, and resources from States, the European Union, and the UNHCR. One change resulting from this newfound visibility was that volunteers were forced by the police to identify themselves. Hence, they had started to wear reflection vests just like the police, while trying to highlight the practical and symbolic differentiation between ‘us’ and ‘them’, the heroes and the villains.

The newfound visibility among the volunteers, aided by the artefact of the high-visibility reflection vest, the very same signaling device used by state agencies of control that they try to subvert, was appropriated into something positive. Used by both volunteers and state agencies, the reflection vests, and its high visibility characteristic, have become a central object and tool of communication that is part of demarking a route and humanitarian corridor to peace and refuge in Germany or the European Union.

The temporarily indifferentiable, and hence invisible, mass of refugees, migrants and people on the move, are vulnerable to the threat of visibility and exclusion as they negotiate a route guided by highly-visible-reflection-vest-carrying-officials controlling the regime-of-mobility of the European Union fortress.

This is an abbreviated version of the article:
Fradejas-García (2017) Reflecting the Refuge Crisis: On the object of high-visibility reflection vests in humanitarian refugee corridors to the European Union.
The Unfamiliar, 7(1), 43-47.
https://doi.org/10.2218/unfamiliar.v7i1.1892