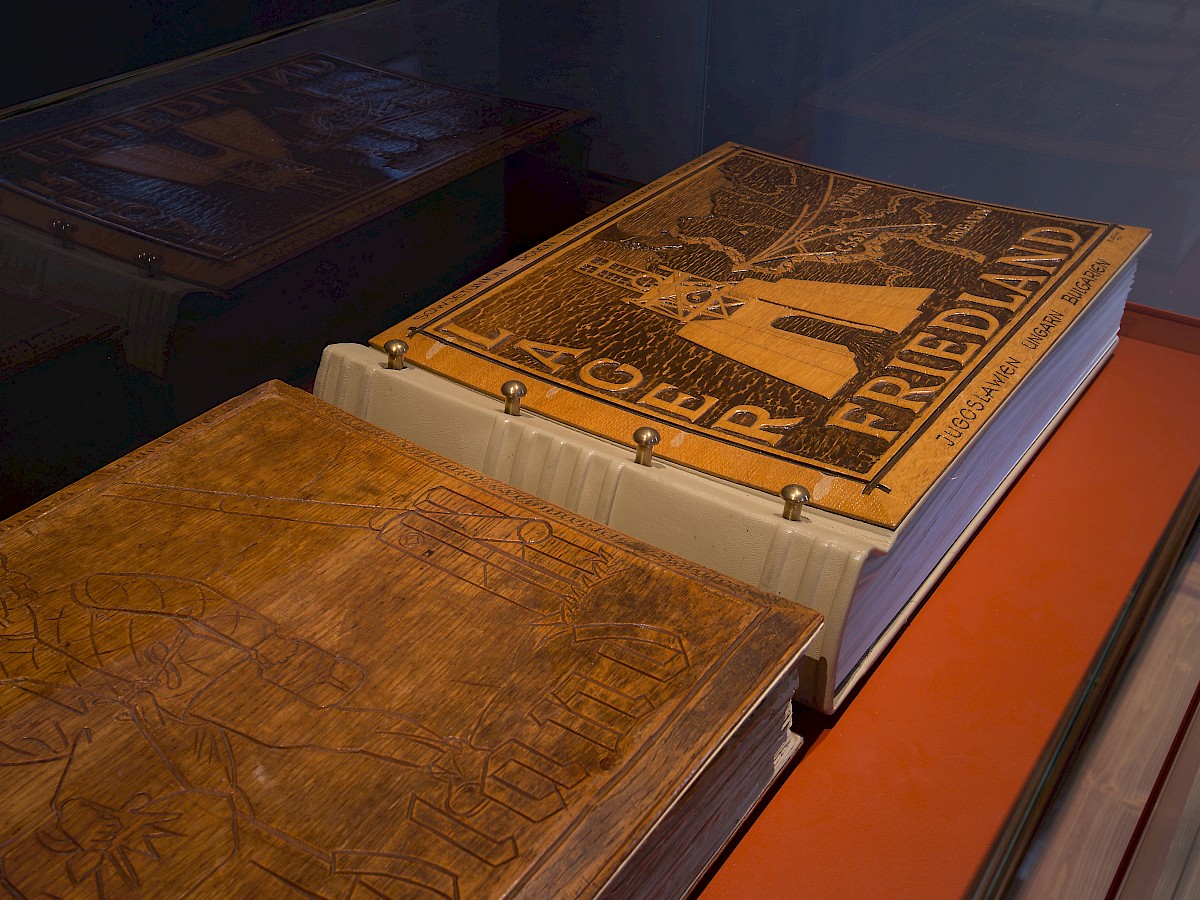 The camp chronicles at the Museum Friedland document the history of the transit camp by means of newspaper articles and photographs. They don’t just document the perspective of the camp workers who collected and filed these documents, but they also speak diverse ‘languages’.

A Material Perspective on the Camp Chronicles at the Museum Friedland

Entering the first room of the Museum Friedland, one encounters two books, each weighing several kilograms and containing a few hundred pages. Both seem well-kept and don’t show any signs of use or wear. At their side the books are held together by sizable metal nails, their wooden covers are embellished with carvings. The first one shows a family of returnees1/refugees, a man and a woman with their child, transporting their remaining belongings in three bundles. Woman and child appear visibly harrowed and walk closely intertwined. The father, standing protectively behind them, glances back at the countries and regions and the time they have left behind, symbolically implied by the raised boom gate in the background. The lettering “Lager Friedland” (Camp Friedland) at the lower left margin of the carved picture makes it obvious that the book is a chronicle of the Friedland Transit Camp. Engraved around the margin of the book cover are the countries and regions from where the inhabitants of the transit camp came from in the time between 1945 and 1960 – the years documented in the chronicle. I read Africa, Czechoslovakia, Russia, Poland, Romania, Yugoslavia, Hungary, England, France and Belgium.

The second chronicle, which documents the time since 1961, is equally as impressive and the design of the wooden cover already illustrates the changes in Friedland in comparison to the first book cover. The family of refugees is replaced by a depiction of the Friedland bell, which in 1956 – as it is mentioned in the chronicle “receives every transport, whether in the morning or evening, whether by day or by night” (own translation). While observing the depicted scene I imagine hearing the ringing bell and picture them greeting and welcoming the “(late) returnees”, who dominate the second chronicle. Instead of the boom gate, a map symbolizes the borders and countries of origin; in capital letters it reads CSSR, Hungary, and Poland. Arrows mark the migration routes from these eastern European countries to the Friedland bell, which embodies Friedland, the gate to freedom. The fact that war-returnees are now superseded by (late) returnees is once again made obvious through the lettering, listing the countries of origin in the margins of the book cover. These now represent eastern European countries: The Soviet Union, Poland, Czechoslovakia, Romania, Yugoslavia, Hungary, and Bulgaria.

As the only objects located in the first exhibition room of the Museum Friedland, the chronicles fill the room in more than one way. They attract my attention – and possibly other visitors’ as well – through their size, weightiness, and the unusual wooden covers. In addition, a video installation above the chronicles allows for a glimpse into the books. This way, visitors can experience the camp through the perspective of the camp staff, which have collected these newspaper clippings and photographs and partly added their own comments and titles.

The chronicles also fill the room allegorically. They are an attempt to capture and secure the history of the transit camp in all its weight and significance and to document it for posterity. Through their size and the lovingly designed and elaborate book covers, the chronicles reference the many experiences, ordeals and emotions that millions of people in transit have gone through on their way to a new life here.

Before looking closer into the contents of the chronicle, I wonder what countries would be listed today. How would the countries of origin of late returnees and those of asylum seekers and quota refugees stand in relation to each other? What picture would be on the cover of the third volume? And what does this reveal about the role of Friedland and our current views of flight and migration?

[1] “Heimkehrer”/returnees: German POWs, but also military personnel and civilians who were behind the lines during WWII and returned to Germany (and Austria) after the war. POWs returning after 1946 are “Spätheimkehrer”/late repatriates and received some financial compensation for their extended captivity.

One of the objects I particularly appreciate are the camp chronicles.

Even during my first visit I was fascinated by them. Not only because they can be found right in the first room of the museum and they are impressive by size and design alone, but also because there are different places throughout the museum where you can digitally browse through them. Thus, even during my first visit, the newspaper articles and other documents transported me to a time when the camp first came into being and I was able to track and comprehend the developments that followed. The camp chronicles not only told me about the historical changes in the transit camp, but through the newspaper articles also revealed the political and social debates behind them.

Due to my background in social sciences, I find these shifts in the social debates to be very fascinating, because they make clear how closely they are linked to political decisions. How strongly political discourses are shaped through power and influence and how powerless actors with less privileges are in these dominant discourses resp. how much is possible if something is wanted by those politically and socially responsible: Especially the great willingness to help the boat people from Vietnam in the 1970s and 1980s in and around Friedland can be explained by the then anti-communist climate. Today's debates about flight and migration are also marked by these interdependencies: In 2015, when both the political and the social discourse pleaded for an open Europe and support for refugees, the spread of solidarity made things possible that we can only dream of today: Voices of the Civil society calling for humanity, the right to asylum, and open borders often go unheard today as the political climate has changed and other courses are set politically.

At the same time, the chronicles also make it clear that there are always recurring continuities within the debates. For example, articles from the 1990s document public debates about counterfeit papers and the sums people paid to prove they are of German descent. As I concern myself with Friedland, I have gained the impression that it was easier in the past to take on the resettlers, categorized and perceived as German. This debate reminds me with a striking potency of today's arguments about falsified papers and unlawful entry; all of them touch upon the question of what is one's own, what is foreign and what distinguishes the two.

And yet the chronicles do not only document the changes and continuities of social debates. During my later visits to the museum I accompanied Samah, one of the museum education staff, during a guided tour with the slogan “with other eyes”, and I recognized that the chronicles are capable of “speaking other languages” as well as actively shape relationships and start conversations.

As Samah Al Jundi-Pfaff, the museum education staff member, explained to me, museums in her home country Syria as well as in the countries of origin of the transit camp’s inhabitants are a testimony of the past, something old and historical, that has few correlations to one’s own life.

In the past, I had a similar approach to chronicles. To me, they documented history, made historical changes and continuities visible and explained connections. I only considered them current and relevant to me, to the extent that they e.g. explain our current situation, such as political tendencies and social structures, through the documentation of the past.

During the guided tour “with other eyes” with Samah Al Jundi-Pfaff, she granted visitors of the museum insight into the type of tours she offers for refugees staying in the Friedland Transit Camp while they wait for their transfer. Through this, I was able to learn of and appreciate a different type of potential the chronicles possess: Their role as a mediator and concurrently, their ability to connect people through conversation and relationship, and to develop an outlook.

During these guided tours, the museum educator invites refugees to use the chronicles as a base to think about their own families’ photo albums e.g. albums created after a wedding. Then they talk about family relationships, what has changed, what they have lost; but also, what new things have developed, about Friedland and their future. Even though these are often no happy stories, Samah Al Jundi-Pfaff strives to appreciate the individual people and to let them have a chance to share their unique stories. She sees herself as a sort of social worker helping the camp inhabitants talk about their experiences, processing them a little further and creating a sense of community. For her a specific notion is always present, and she tries to convey this during her guided tours: “Salamstan, Friedland (literally peace-land), is a land of peace, let us celebrate the peace, let us live in the moment and enjoy it.”

My aha-effect in terms of the chronicle is therefore likely to be compared to the experiences and feelings that, as Samah described, refugees experience when they realize that the museum also has something to do with their lives, that it is newly constituted every day through their stories. On this afternoon I was fascinated by the unknown perspectives and – to me – hidden potentials of the chronicles. They can also be the starting point for conversations that give rise to positive feelings and attitudes, and they are not just related to the past, but clarify current references, they can influence perspectives, emotions and attitudes, and thus our future.