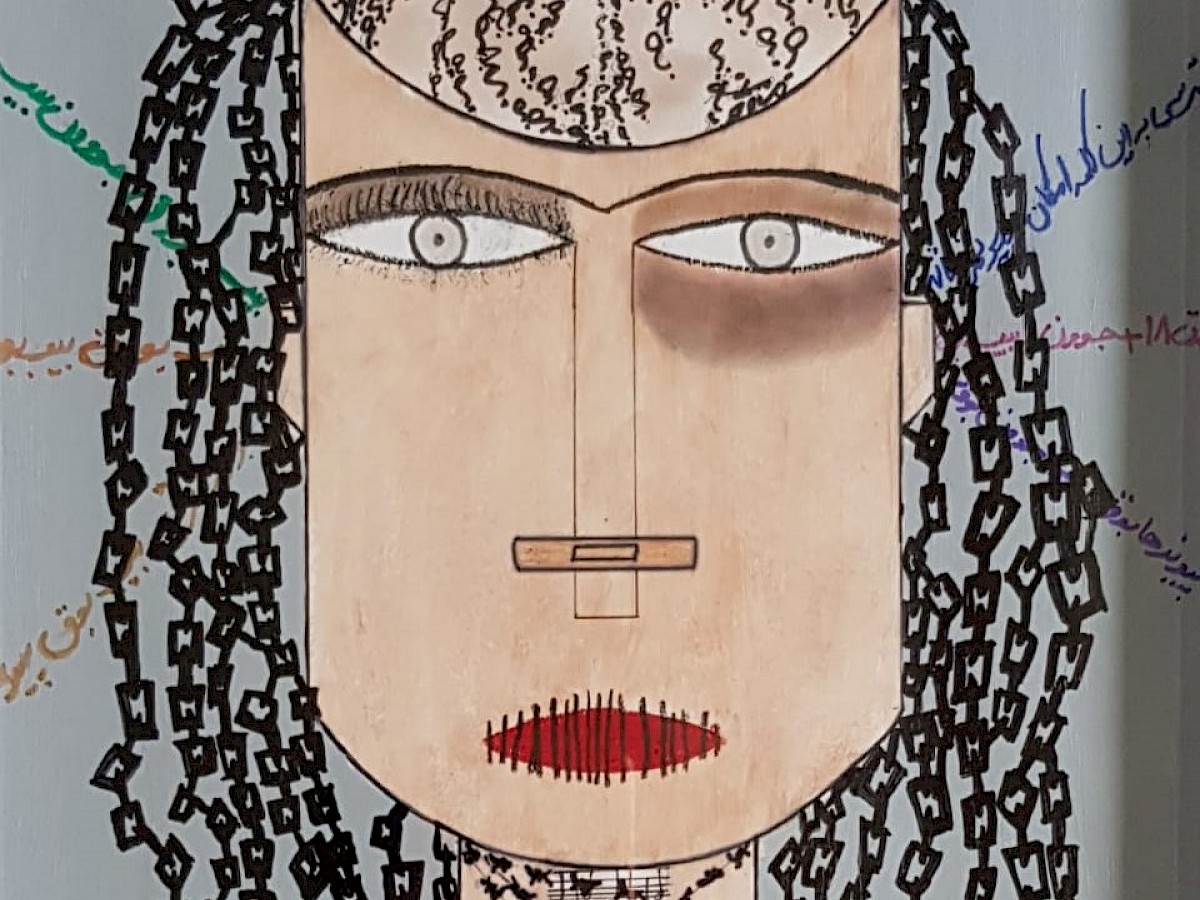 Nishtman Abdollahi is a Kurdish political activist and artist from Western Iran. Her main reasons for leaving the country were her personal situation, and also the oppression of women in Iran in general. The latter theme was the driving force behind this portrait titled Less than Half. Nishtman drew the woman on the picture with materials like sunscreen and make-up, thus with the actual cosmetics that are used in Iran.

Portrait of Women in Iran

Nishtman was rejected as an asylum seeker by the German Federal Office for Migration and Refugees initially and appealed the verdict, which means she is still waiting for the decision on asylum and has no certainty about her case yet. Despite the threat of being deported back to Iran, Nishtman decided to speak out publicly in exile. She addresses topics like freedom of speech in Iran and, of course, women’s rights.

Her current painting addresses gender-related harassment and violence. More precisely: it tries to show the different and complex forms of violence against women. Since the artist didn’t have much painting equipment, yet, above all, because she wanted to paint this picture in the most “natural” way, she used sunscreen, make-up, mascara, and an eyeshadow brush to paint the portrait of the female she named “Less than Half”. By “natural” she means using the original cosmetics women in Iran (and elsewhere) use to make themselves up. Only for the background she used markers and oil colors.

Painting this picture was a long and intense process of working and reworking, which found expression in several layers of color and make-up until she felt that it was adequate to what she liked to express. Nishtman Abdollahi said she was overwhelmed and surrounded by pain when she started working on this piece, and she wanted to express her anger and rage. When I saw the first draft, the intensity, which this picture reveals by its immediate rawness, struck me. What touched me most in the final version was that this dramatic dimension of the portrayal arises from the plainness of its form.

The cruelties against women in Iran are diverse. Not all of them are visible at first glance; like the black eye, the physical harm against women’s bodies covered with make-up. The picture also addresses the manifold ways of controlling women’s bodies (here depicted as tied down) by force. The actors who control women are many: their parents, husbands, families, but also the society in general by the social and emotional pressure it exerts, and finally state actors who punish and kill women for different forms of disobedience [1]. Not even hearts are free since under these circumstances women cannot choose freely whom to love, since this is impossible for several reasons, like status and family issues but also due to the persecution of sexual non-conformity.

A piece of cloth that recently became bravely contested by feminist activists in Iran [2], Nishtman illustrated as chains: the Hijab women are forced to wear by law.

The painter also addresses the indirect strains of social pressure in the form of ideals, for which many women in Iran undergo plastic surgeries to gain recognition, as the tape on the woman’s nose suggests. Furthermore, there are other forms of social violence like verbal and sexual harassment women reportedly face in their everyday live [3]. Nishtman Abdollahi has outlined such advances on the paper next to the woman's ears, but she decided to censor this offensive, painful, and threatening “bullshit” women in Iran have to endure, as she expresses it. Women cannot speak out against these hostilities without facing serious menace, as the sewed-up mouth in this portrait indicates.

The female voice that suffocates in the barbed-wired neck is a reference to the singing prohibition for women in Iran. The sheet music in the woman’s throat stems from the fourth movement of Ludwig van Beethoven’s String Quartet No. 16, “The hard decisions. Must it be? It must be!”; a song which addresses hard decisions not only Nishtman Abdollahi has made, when she left her home. Despite the wide range of severe difficulties, she faced and still faces, she is determined never to subordinate herself to such patriarchal and religious conditions. Therefore, she struggles in court, in political engagements, and also through creative artistic expressions, for which she repurposes unusual materials in a quite stirring way that is hard to withstand.

[1] The situation of women and girls in Iran is discussed in the following report of the Secretary -General of the U.N. https://undocs.org/A/75/287 and in the following U.N Press Release: https://www.ohchr.org/EN/NewsEvents/Pages/DisplayNews.aspx?NewsID=26862&LangID=E

[2] One of the most prominent figures is Nasrin Sotoudeh, a well-known Iranian human rights lawyer, who defended head-scarf protesters and has herself protested against the law enforcement for women to wear hijab. She has been sentenced to 38 years in prison and 148 lashes in March 2019. https://www.amnesty.org/en/get-involved/take-action/iran-free-nasrin-satoudeh-now/ .