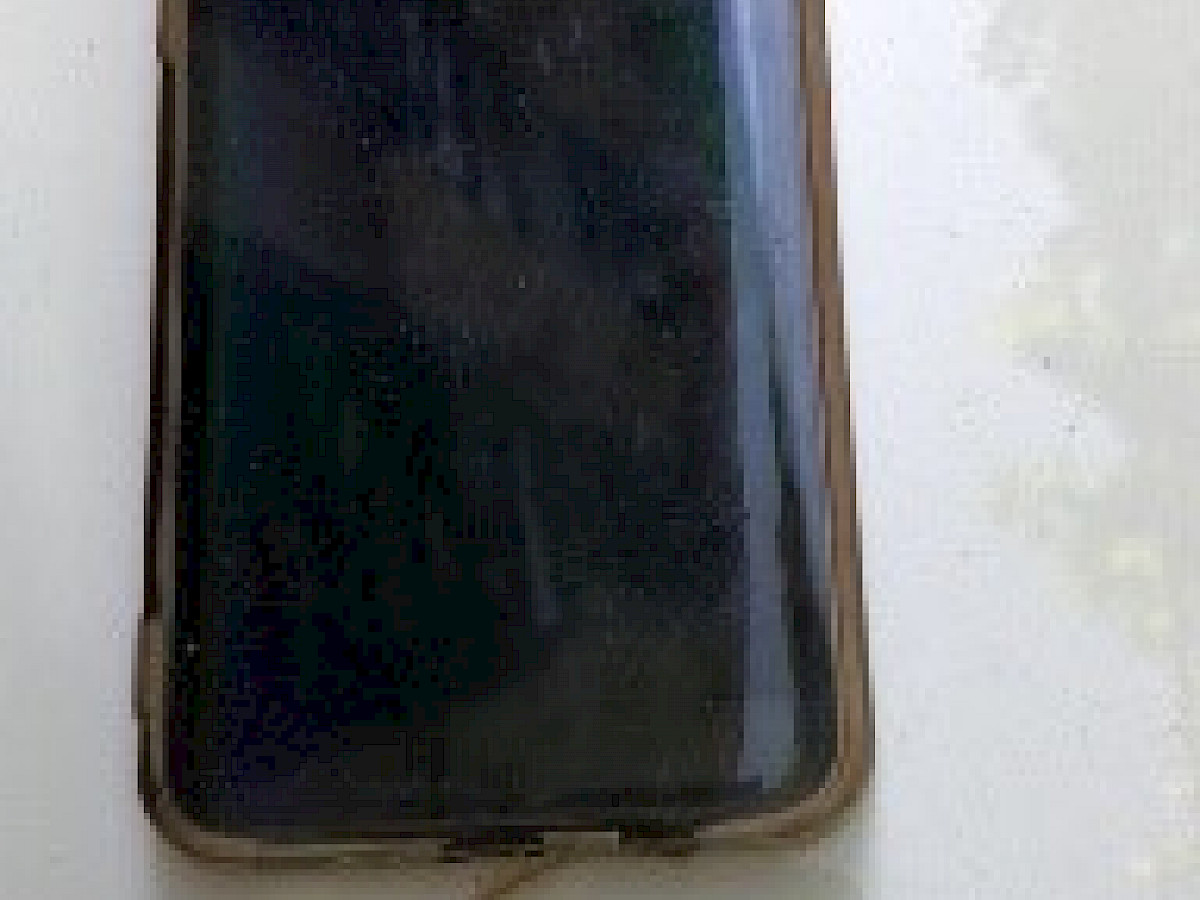 This mobile phone belonged to a 19-year-old man from the Republic of Côte d'Ivoire. It was already some months that he had arrived in Greece and sought asylum there. He was staying at Moria Camp. He lost his life in a fight over this cellphone.

On 5th of July 2020, I received some news and videos from my contact in Moria camp, Greece. He explained that as usual [1] another clash had broken between Afghan and African refugee groups in the camp. A mobile phone was stolen and this led to catastrophic bloodshed in which the cell-phone owner who was an Ivorian young man got stabbed and lost his life and many others on both sides were wounded. The young man was lying on the ground. His body seemed to be well-built and strong, but he was severely bleeding, taking his last breaths. Someone from the African community was holding his hand giving him courage to embrace death, someone else was praying and performing kind of a ritual. People were swarming around him recording videos by their mobile phones. I replayed the video and looked at the young man’s eyes that were shining in the darkness of his black skin. Turning his head from side to side silently, he looked at the people around him in disbelief, like he was in a dream and was not feeling any pain and had no idea what was going on. Perhaps many hopes, passions and aspirations were dying with him too.

The same familiar theme: where poverty is, violence is. But why is that?

Almost 18,000 refugees live in Moria camp that has been initially established and considered to accommodate 3000. People living in overcrowded places in low living standards while overwhelmed with stress and anguish for their asylum/refugee applications. Everyone has their own personal life story and problems; some have left a family or a life behind, some nothing. The host society of Greece is not welcoming to them. The youth get rejected at the gyms where they go to register for work-out [2], in the streets they run into passengers who cover their noses with their hands while passing by [3], some leave that area of the beach where refugees get in the water [4].

In such a pressurizing situation, the materiality of the camp as well as the material objects with which the person interacts, play a significant role both in the person’s disposition and temperament and also in the camp atmosphere and ambiance. A comforting infrastructure would significantly soothe tired souls and keep frustrated people from getting irritated. Similar to how a cool room in the hot summer, good food and drink when hungry, comfortable shoes while having to take a long distance on foot and have no money to take a taxi or a bus, a suitcase with roll-wheels that make it easy to carry the heavy load in it, internet service while spending the precarious time in camp and a good quality mobile phone by which one can access to internet or take good photos, … would heal weary nerves.

In contrast, defective infrastructure and unfriendly materiality stimulate the irritations further: a man who is just back from the interview session of his asylum application and is nervous due to the answers he has given that might put his asylum procedure in peril goes to the toilet, the toilet seat is broken, or there is no water. When he wants to leave the toilet, the door lock stuck, he opens the door with a hard blow of his foot on the door [5]. As such, vandalism sometimes is a reaction to the dissatisfaction with the material infrastructure shadowed by impressions of inequality and uneven power relations. Furthermore, Vandalism can be explained by Maslow's hierarchy of needs; morality is located on top of the pyramid after the fulfilment of physiological needs and the need for safety and security. A person is less likely to think of moral matters such as respect for public properties and rights before his physiological needs and the need for safety and security are met.

The same argument is applicable to personal properties, lack of which is interpreted as poverty. Lacking things and void of desirable material objects brought about to one’s life by a combination of deprivation, power relations and violation of rights could provoke negative feelings and affects such as anger, envy, hatred, etc. Likewise, some crimes such as violence, theft and robbery could be the consequence. An Afghan refugee has snatched a mobile phone; it does not mean that all Afghan refugees are criminals or that refugees all are violent. But it does mean that this tragedy is a result of the confinement of 18,000 people in a cramped area in critical living conditions (see guardian article below.) Twenty-four hours before this incident, the Greek government announced further restrictive measures on the country’s refugee camps meaning to limit refugees’ commute to the city during the tourists’ flock to Greece’s beaches and resorts [6]. Thanks to Corona, these days everybody knows what physical and psychological consequences a lockdown could have. This death is one of them.

Humanitarian organizations spend billions of the EU aid on camps’ infrastructures longing for sustainability and resilience as the ultimate goal. Probably a reassuring infrastructure that reflects respect for human rights would better guarantee the fulfillment of those goals. If we desire forced-migrants to integrate into the host society the way they feel part of it, living up to the norms and regulations, contributing to the well-being of the society, then we need to treat them with respect. I remember Rasul, the Afghan refugee who built a sophisticated grill in Friedland Garden as a gift the day he left. “…They were kind people; I wanted to return their kindness, so I built this grill…”, answered Rasul when I asked him (during the translation for my colleague Ute Marie Metje) what his motivation was to build the grill.

[1] According to my informant these conflicts are commonplace. He says: “Afghan refugees hold the assumption that African refugees receive a bigger pension either for being Christian and not muslim like them or due to the judgment based on the flashy appearance of Africans; clothes, shoes, perfumes, good food and drink”. “Africans spend their money on these stuff to enjoy the life”, he added. (Every refugee receives 90 Euro assistance pension per month).

[2] Talks of an African asylum seeker in Moria camp via video call interview about his experiences in Lesvos.

[3] Talks of an African asylum seeker in Moria camp via video call interview about his experiences in Lesvos.

[4] Arif mentioned in his talks during the interview (this had happened in Italy), see https://materialitaet-migration.de/material/stolen-things-and-a-stolen-lifetime/

[5] I asked a refugee why some facilities are broken and he answered: “either due to the sun and hot weather they run down or people damage them...”