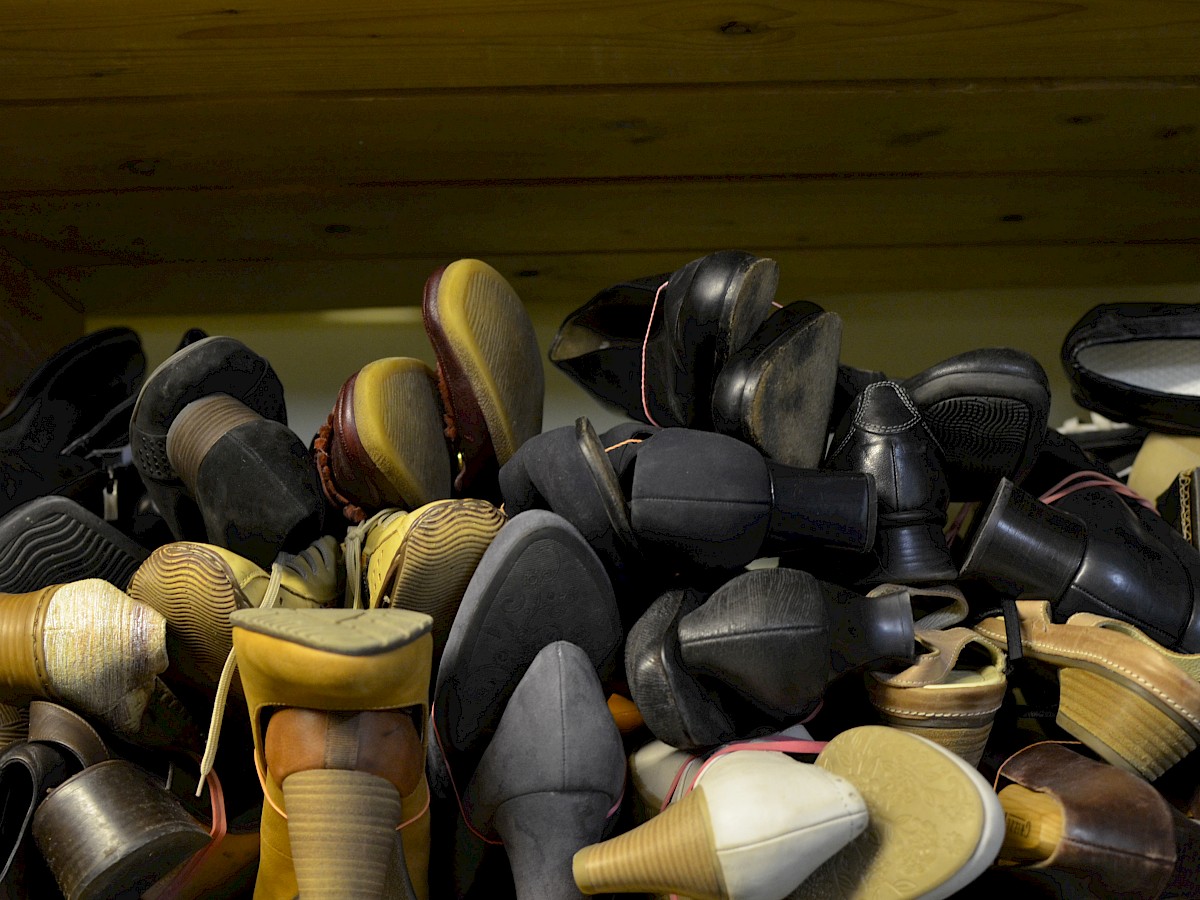 Worn-out shoes with holes in the soles, clothes with burn marks or torn linings, handed in as donations at the Caritas clothing store in Friedland. When unpacking the donations, I often asked myself: What criteria do donors use to clean out their closets, attics and basements? What motives encourage people to donate? And what is true or supposed charity?

Charity is the work of individuals or organizations for the benefit of the needy through alms, gifts or donations [1]. When more refugees began arriving in Germany in September 2015, calls from the clothing store in Friedland for donations of clothing also met with a great response. Since then, clothing, shoes, dishes, pots and pans, suitcases, bags, belts, scarves, bedding and towels, children's toys and much more have been donated. These items can be purchased by the refugees for a symbolic fee. While the perspective of the refugees was considered in "Need or Greed", the perspective of the donors will be examined here.

Some donations, packed in large bags, baskets or plastic sacks, easily identifiable by their smell as coming from the dry cleaners or freshly washed, partially ironed or at least neatly folded, are delivered to the clothing store. However, donations are also handed in that actually belong in private household waste: dirty shoes with holes in the soles or broken heels, boots with worn leather or unwashed skirts, blouses, pants and underwear stuffed into plastic bags – stained, broken and smelling musty. We were puzzled by a donation the other day that contained eight individual shoes in good condition in various sizes. Although we waited six weeks and assumed that we might have missed a donation, this mystery could not be solved.

The question about the motives of the donors shows how different they are: While some want to create space and sort out everything unnecessary and superfluous, others very consciously consider which things they can give away to help others. These donors want to do good, to bring joy by donating clothes or other items, such as schoolbags, that are no longer needed in their own household, by neighbors or friends, but are of good quality and in good condition. They are guided by the idea of true charity. Even if the donations are not suitable for the clothing store in Friedland, items in good condition are forwarded as donations, e.g. to Romania, as a cooperation has existed here for years. This means that if the clothes have arrived clean and neatly packed, but do not correspond either to the season, size, cut or design of the clothes or articles that are needed in the clothing store, they are packed in extra boxes, labeled and placed in the rooms for further transport.

And what considerations guide donors who entrust their personal 'household waste' to a church institution? Who go to the trouble of packing these items themselves and transporting them to the clothing store with the feeling that they are doing true charity? Who make a lot of work for the volunteers with such donations, who have to take out every single garment and item gloved, unfold it and check its condition, followed by the decision to sort out the garments as unusable. All donated items that are damaged, dirty, or otherwise qualify as household trash are placed in specially designated rag bags and discarded [2].

Can it be that donors of such supposed charity want to soothe their own conscience and at the same time have the need to appear outwardly caring or even generous? But this does not succeed, quite the opposite: supposed charity disrespects and disregards the refugees and volunteers in equal measure and is an expression of a subjectively felt superiority.

[2] The ratio of good donations and household trash dropped off at the clothing closet can only be estimated very roughly, as no donation lists exist. While on some days the true donations predominate, on other days it is the supposed donations, as can be read from the number of rag bags in one shift of volunteers.