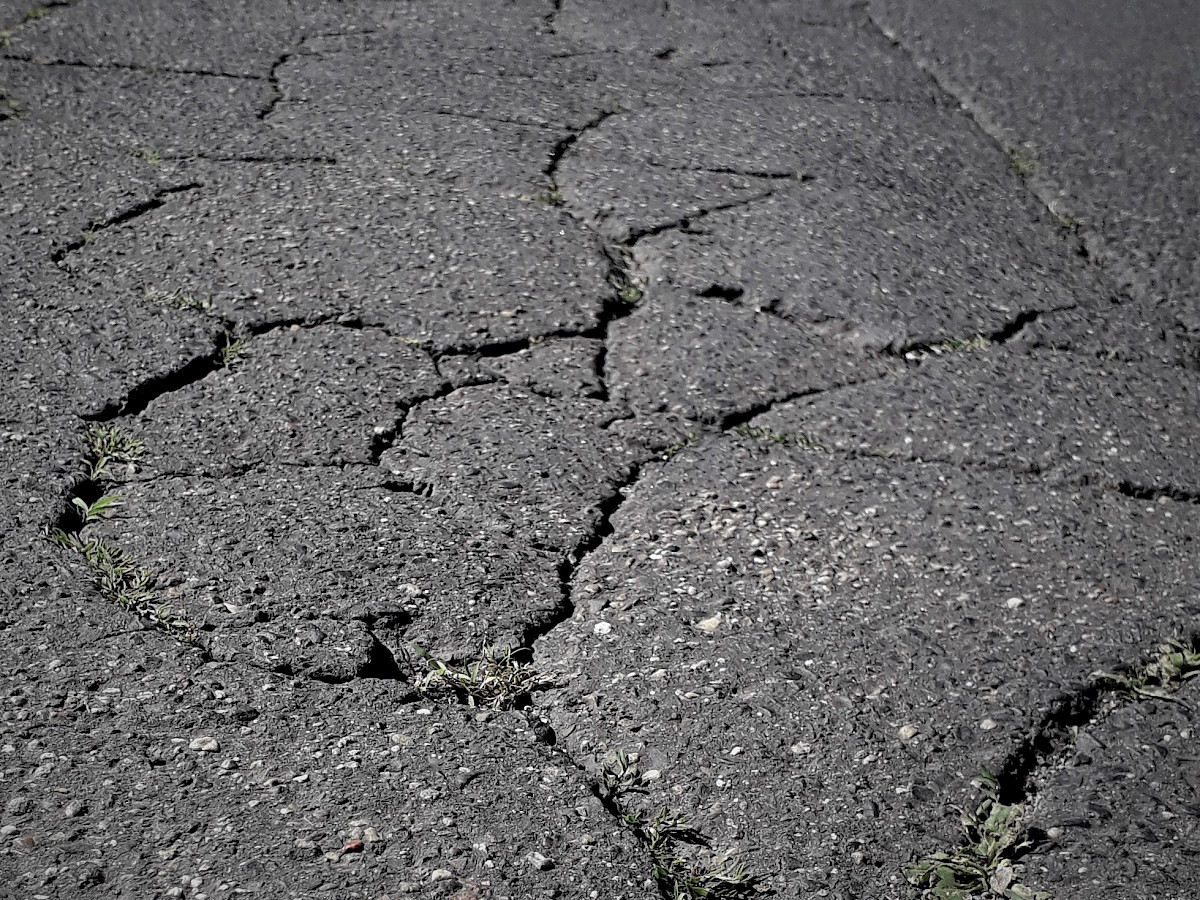 In 2014 Fiekremarme Nagash Beshe took to the streets of Addis Ababa to join the protest for a free and democratic Ethiopia. The following dramatic events forced him to flee the country. Deprived of personal photographs and family contact, this shot, taken by his mobile phone, is a visual metaphor of the streets, the violently cracked down protest, the wounds of the dead and injured, as well as the multiple cracks that permeate the country’s society.

Fiekremarme Nagash Beshe comes from Addis Ababa, Ethiopia. He is 34 years old, a calm, friendly, and thoughtful person. Fiekre, as his friends call him, worked as a driving school instructor in the country’s capital for many years. In 2014 he took to the streets with many thousands of other protesters who came from different milieus and ethnic backgrounds. The overhead crossed arms became the symbol of the protests. Fiekre and many others demanded an end to dictatorship, freedom for all citizens, free speech, economic possibilities, the end to police brutality, and the ongoing ethnic violence in the country. The massive peaceful protests were brutally suppressed by state forces, leading to heavy casualties. [1]

On August 6, 2016, again, thousands of people went onto the streets. Fiekre was among them as the security forces attacked the demonstrators. He started running but stumbled in the turmoil and fell to the ground. While lying on the asphalt, he was severely beaten with a truncheon by a police officer. “Luckily, demonstrators could overrun the security forces by a counter-attack. That is why I managed to escape the situation. Otherwise, I would be dead,” Fiekrere tells the story with a pensive face. As a result, he suffered an artery damage in his left thigh and severe internal bleeding that had to be stopped by emergency surgery. The scar is still clearly visible.

The same year, Fiekre joined the “Patriotic Ginbot 7 Movement for Unity and Democracy” (“Ginbot 7”) [2], an anti-government movement and political organization, which declared the struggle for a democratic, peaceful, and pluralist Ethiopia [3]. He worked in a clandestine group, which distributed brochures at night, put up posters, wrote political slogans on walls, recruited new members, and held secret meetings. Every single action entailed the risk of getting detained and/or killed by the police.

Nevertheless, he was committed to continuing protests and his political activities in the “Ginbot 7” movement. In early 2018, however, some group members were detained while distributing leaflets published by the organization. They were either arrested by the police or rather done away with. Fiekre went underground and hid in different places for eight days. Thus far, he does not know about the whereabouts and fate of his seized friends. He assumes that they were tortured into giving away information and then killed subsequently.

To avoid sharing the same destiny as his friends, he could not go home or to any other place he usually used to visit. In the days following the arrest, he desperately developed an escape plan with his remaining friends. His group leader introduced him to an Arabic-speaking broker from Somalia, with whom he could hardly communicate, but who provided him with a visa for France. The price was high, but he had no choice. He had to spend all his savings of the last six years and also asked his family for help, to raise the sum of 450.00 Ethiopian Birrs (ETB) (almost 12.000€). Also, Fiekre was forced to hand over all his school certificates, driving licenses, and documents to the middleman. He never saw them again.

The visa enabled him to leave the country without difficulties. When he took the plane, he did not even know that he was on his way to Paris, due to the lack of understanding with the broker. There, he tried to find people he could speak to in Amharic to figure out where to go and what to do. Eventually, he randomly met someone who offered him some food and encouraged Fiekre to take the TGV to Frankfurt. In Frankfurt, again, a stranger showed him how to get to the central initial reception institution in Gießen in the federal state of Hesse (70km north of Frankfurt) and bought him a train ticket.

The opening of his asylum procedure as a politically persecuted person was followed by an odyssey through many Hessian reception facilities. He spent more than six months in a provisional reception center on an old university campus. In the meantime, he joined the Frankfurt section of “Ginbot 7” to continue his political activities in exile. As his application for asylum was rejected, he had to hide for 18 months from the police to evade the Dublin time limits for transfer [4]. The second application for asylum was declined in a very short time since he could not prove being personally persecuted in Ethiopia. Right now, Fiekre has been given only a temporary suspension of deportation, which will expire shortly.

At the moment, he attends a German language class. His sincere wish is to start vocational training. Recently, a workshop offered him to take a position as an apprentice car mechanic. However, since his work permit was not approved by the Ministry of Migration and Refugees (BAMF), he had to let the opportunity go.

While Fiekre explained his story chronologically well-structured on the base of events, the periods that were tremendously dangerous and insecure blur in his narrations. He struggles to arrange these periods of his life that were dominated by existential threats. It seems he has repressed the memory of them.

While others use biographical objects as sensational stimulations of memories, Fiekre does not possess such things. He uses the documents of his procedures and the interview minutes to orientate and locate certain events of his biography. Still, the right materials are not always easy to find. In this sense, the folder serves as a portable archive of knowledge and reassurance that enables him to orientate in his narration and, at the same time, contains the negative authority decisions, the cause of his desperate situation today. The binder materializes his course of migration as well as his rejection.

Abiy Ahmed Ali, Ethiopia’s president, was awarded the Nobel peace prize in 2019 for his reconciliation efforts with neighboring countries, primarily Eritrea [5]. However, he seems to be unable to tackle the internal issues, to pacify the highly divided nation, and to provide perspective and freedom to its citizens.

First, the threats of being persecuted and killed are still in place since the people in the security apparatus that suppressed the protest in 2018 are still in charge. At the end of May 2020, Amnesty International issued a report in which they accused the Ethiopian security forces of mass detention, inhuman treatment, and extrajudicial killings [6]. At the end of June 2020, the musician and activist Haacaaluu Hundeessaa was shot in Addis Ababa after criticizing the government in an interview. At least 80 people were killed in the following protests; senior opposition members were arrested [7].

Second, the chances to become acknowledged as an asylum seeker have become extremely low, due to the positive image Ethiopia has gained on an international level. The dangers to his life in Addis Ababa remain the same, while recognition of them dwindles. For Fiekre, who strives for democracy in his country and for living a regular life in Europe (until then), this shift in Ethiopia’s representation and the more or less untouched internal conditions are a perilous mixture.