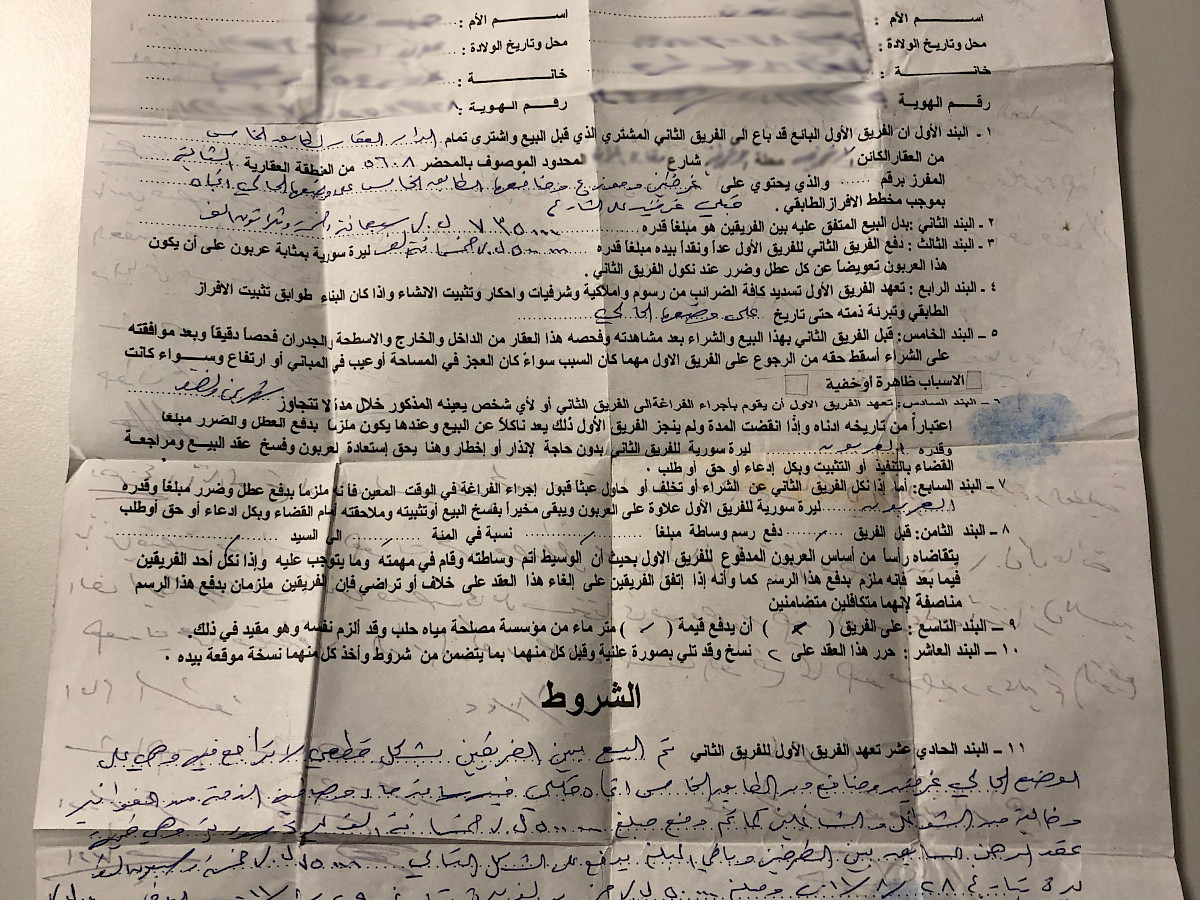 About the value of the title deed

The deed provides information about the condominium that the M. family purchased in Ashrafieh, Syria, before the outbreak of war in 2010. It is an apartment with two rooms, kitchen and bathroom for five people. Buying an apartment or a house in Syria is the first visible step towards a respectable life as a family, because ownership means stability and security.

About the value of the title deed

Even before the outbreak of the war in Syria, Mr. M. had bought an apartment in Ashrafieh, Aleppo for his family, wife and three children, for which he had had to work hard. At that time, the family itself lived in Afrin, a city in northwestern Syria, which at that time was still inhabited by a majority of Kurds [1]. The M. family is also Kurdish. Owning a house or an apartment is the first important step for Syrian couples to ensure safety and security for the family and to be able to lead a respectable life. The husbands are responsible for the purchase. Depending on the financial situation of the wife's family and depending on the negotiations before marriage, they support the men financially. Often, young married couples initially live in the household of their parents or in-laws until the time of purchasing property. By purchasing the apartment, Mr. M. has met the social expectations of his role as a man and secured the recognition of both families and the social environment.

The document that Mr. M. brought back from Syria and that he guards like the apple of his eye is a title deed to the family's apartment in Ashrafieh, Aleppo, two rooms, kitchen and bathroom. Unlike other deeds, this is a thin, translucent piece of paper that Mr. M. carries folded several times in his wallet. The deed does not contain the name of the wife, the date of birth or the address of the buyer or their Syrian ID numbers. Nor does the deed contain official stamps as proof of formal registration by the Syrian state administration. Clearly visible, however, are four fingerprints taken from Mr. M. himself, i.e. the buyer, the seller and the eyewitnesses to the transaction.

Why has Mr. M. carried this title deed with him since fleeing Syria six years ago? What value does the document about the ownership of the apartment have in a region that has been destroyed by war, depriving people of their property and thus virtually dispossessing them? And what hope does he still associate with it? Mr. M. has already tried several times with the help of Google Maps to find out whether the house still exists. Apart from a black spot, however, he has not been able to see anything on the screen.

The answer to the questions makes it clear that the importance of the deed for Mr. M. lies less in the real monetary value, even if he had to work very hard for it. The title deed means much more to him: It is important as proof of ownership of his own home, regardless of whether it still exists or not. Because: With it, he has shown that he has taken good care of his family and met social expectations. The longer he no longer lives in Syria, the more important the document becomes for him as confirmation and self-assurance of the times when he was able to fulfill his role as a man and provider for the family. And finally, "the document is important for the future of his children. So it could perhaps be that the house still existed, which is why he would like to keep it at all costs. Will this hope be fulfilled or has the document become completely worthless as a result of the war? This question must remain unanswered here.

[1] Since the M. family fled Syria in 2013, Afrin has been the target of armed conflicts several times; for example, in 2018 between the Turkish military and the Kurdish militia YPG. Turkish troops, together with rebels of the Free Syrian Army (FSA), had driven the Kurdish YPG out of Afrin. Tens of thousands of people, mostly Kurds, have since then (permanently) lost their homes in the northwestern Syrian city (Spiegel Online 18.07.2018, link: https://www.spiegel.de/politik/ausland/syrien-afrin-unter-tuerkischer-herrschaft-die-kaempfer-machen-was-sie-wollen-a-1218366.html; accessed: 30.10.2019).