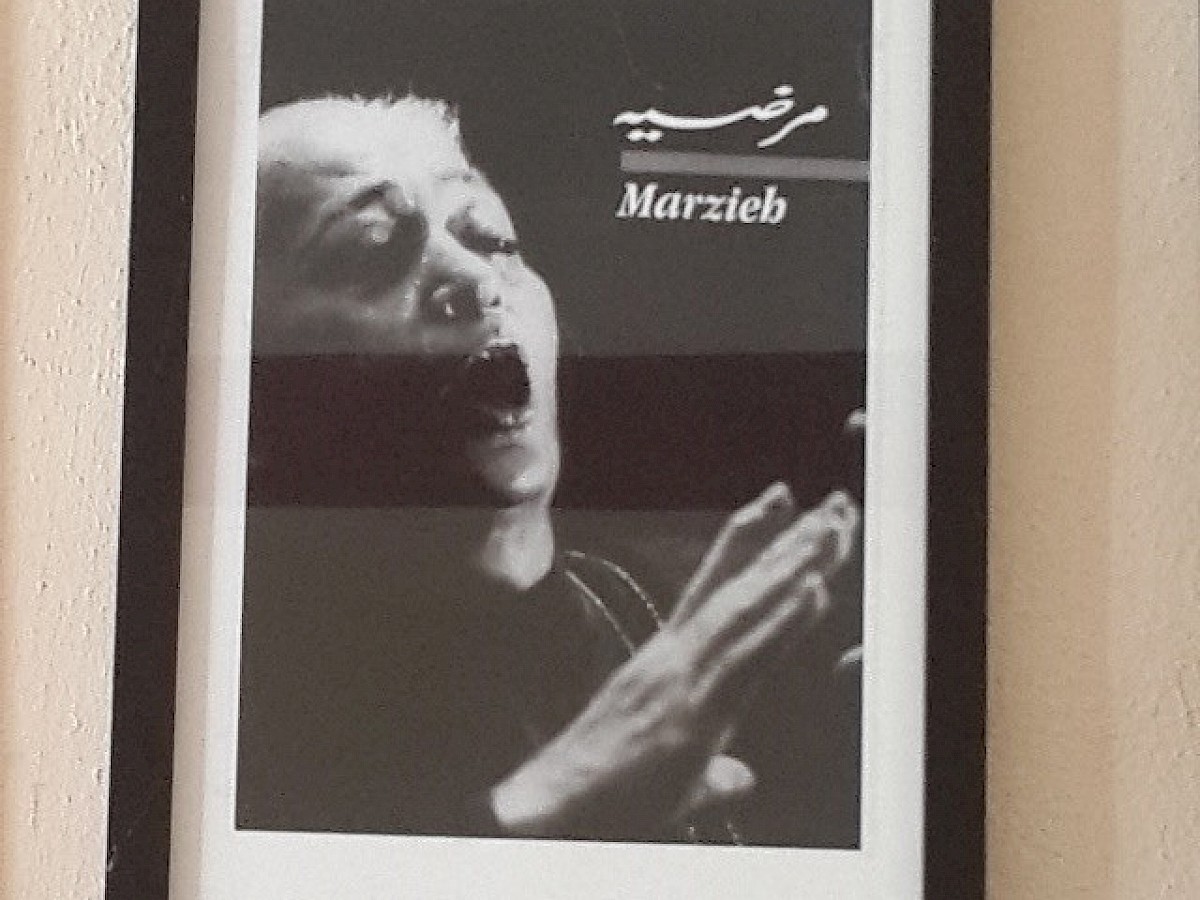 When your perspectives affect your materiality…

This is a picture of Bahmans favorite singer Marzieh, a very popular singer from Iran during the 1970s, the time before the Iranian Revolution. In his restaurant Shirin, Bahman put up a picture of her in a beautiful frame.

A Mindset on The Wall

Bahman is around sixty now. He has a vegetarian restaurant in the city center of Göttingen. He himself is not a vegetarian though. In the course of Iranian revolution he left Iran to study in Bochum, Germany.

Since the Islamists took power in 1979, Bahman never went back to Iran. He is a supporter of one of the opposition parties of the Islamic Republic of Iran and formerly the Shah.

We were looking around his restaurant searching for an item from Iran, something reminiscent of the home country. There were not many though. A calligraphy in Persian that Bahman had made, a traditional Persian fabric which was posted like a picture frame on the wall. Beside that a picture of Marzieh the old classical Persian singer of the seventies - caught my eye. It was a black and white portrait of her, an old familiar face with her mouth being half open like crying something out loud while singing. When Bahman was asked whether she was his favorite singer, he explained that because the women were prohibited to be heard in Iran after the Iranian revolution took power, Marzieh was banned to sing. She left Iran during the nineties and joined the National Council of Resistence of Iran in France and later on she went to Iraq and joined the Folks-Mojahedin to fight the islamic regime of Mullas in Iran. We were not sure if he liked her songs or rejoiced in her voice, he did not mention it. The only things he told us about her was political matters that Bahman appreciated. He was asked whether he loved her songs as well. Bahman answered “yes”. We asked Bahman whether he would still hang Marzieh’s picture on the wall if he did not like her songs? The answer was again “yes”.

There was also a picture of a soldier in uniform in a small frame. We asked Bahman if the photo belonged to a friend or relative, and he answered that it was the picture of a soldier from Göttingen who had fought against Nazis and national-socialists in the forties and was killed. Attached to it were some stickers with slogans against racism and facism.

Before we were told the stories behind these simple objects, they seemed to be some ordinary things that were used for decoration, while some of them were related to where Bahman came from. Though, after we were told the stories about them, looking at these material objects in Bahman’s shop, was like we were looking at Bahman’s social-political mindset unfolded before our very eyes as a political aesthetic landscape. Some of these seemingly not very spectacular things were loaded with the political attitudes and perspectives Bahman held.

Our notions and the viewpoints we hold towards certain things, in many cases are reflected in the way we materialize our everyday life or in the works we produce, as John Berger2 states in his book About Looking (1980, pp.134-140). Thus, the places where we live, the experiences we have and the landscape we grow up in affect our perception and creation of the material world around us. The items with which we decorate our private spaces like home and in case of Bahman a public place like his restaurant are sometimes manifestations of what we feel inside, what we long for or what we seek to tell people. In case of many political asylum seekers the material objects adopt a political aesthetic which is bound with stories and experiences; sometimes hopes, pains or yet hatred.

The last question we asked Bahman was that why he keeps the picture in the restaurant and not at home. Bahman said that he had one at home too but he keeps the picture here in the shop in order to convey the message of Marzieh to people: “No to islamic regime, yes to freedom”, he continued: “I want to let people know I respect Marzieh because of her defence of the women-rights and her fight against anti-women ideology of Khomeini”. He added: “I keep these pictures around; at home and here in the shop as I find them like impulses of hope; hope on this fact that someday soon the islamic regime of mullas in Iran will be overthrown. Without hope I am dead. Everyday that passes by I say to myself tomorrow this dictator regime would be gone. I have said that to myself now for fourty years and this hope had kept me alive…”

[1] As some friends and colleagues in the context of a Stadtlabor Workshop on immigrant entrepreneurs, we visited Bahman in his shop.

Shirin
Crossing the Farther Shore
"Less than Half"
The new Camera
A Picture worth 4.000 Euros
Objects as Means of Motivation
Audio cassette from Iran
The pocket knife
Lagerszenen
The self-made barbecue
A cross made out of refugee boats
Open
Archive