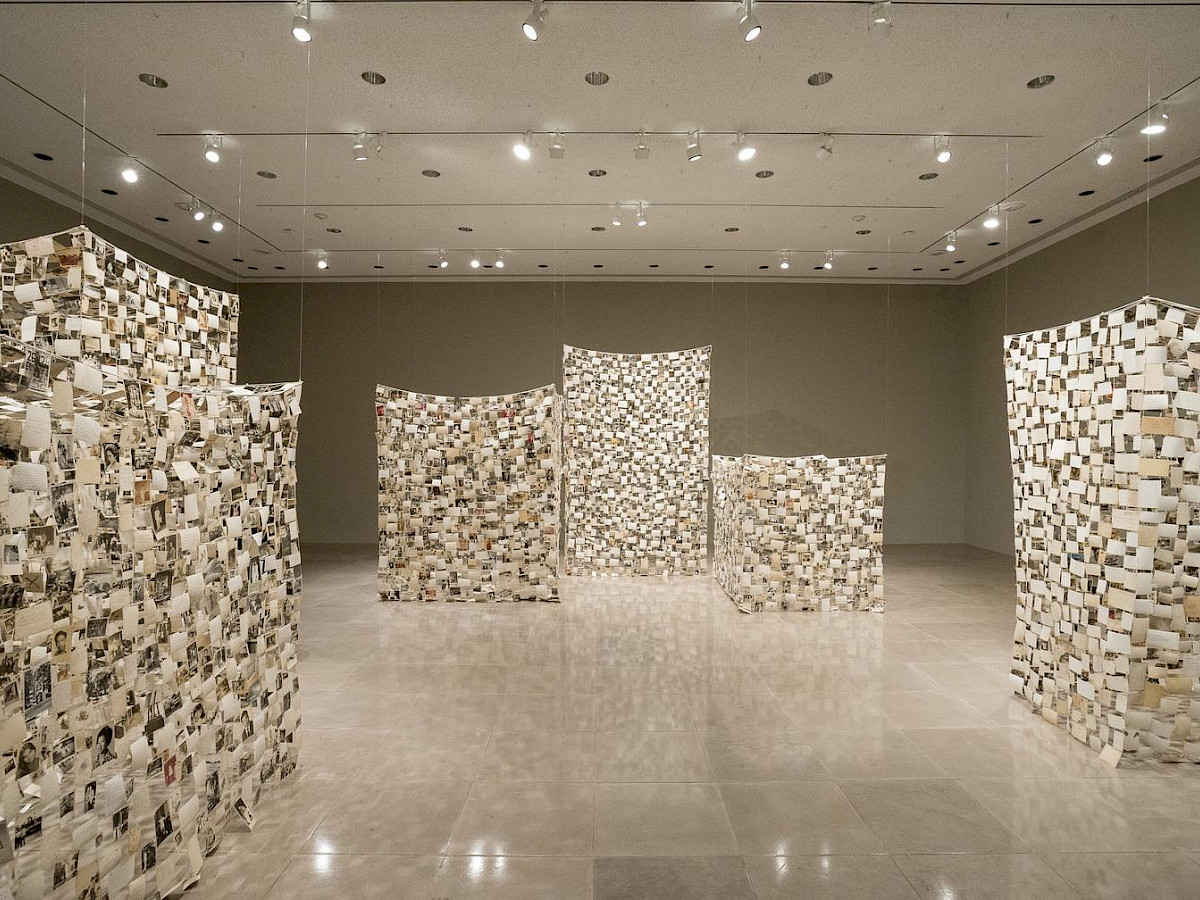 As a photography installation by artist Dinh Q.Lê, Crossing the Farther Shore is a visual archive containing and speaking mostly voices of the pre-1975 southern Vietnamese people, whose stories are either erased by the communist regime or overwhelmed by international media.

The story is about migration experiences and emotions embedded in the artwork “Crossing the Farther Shore” by artist Dinh Q.Lê, who came as a Vietnamese boat person to the United States of America.

The art of Dinh Q.Lê (Lê Quang Đỉnh in Vietnamese) is the post-war reconstruction of hidden spaces, abandoned histories and silent voices directly related to the artist’s experiences as a Vietnamese asylum seeker in California. Crossing the Farther Shore is a notable example of that kind. In the shape of rectangle mosquito nets, the artwork is an installation of thousands of interwoven old photographs showing happy moments, thoughts, and stories mostly of the pre-1975 southern Vietnamese, who might have lost their lives in the war or escaped the country like the artist himself. These photos were later randomly collected from a variety of tourist shops in Hồ Chí Minh city (formerly Sài Gòn) and turned into a visual archive, which contains and speaks the hidden voices.

Crossing the Farther Shore is inspired from dreams of the artist’s mother. In her dreams, she often visited her homeland, where she was very happy with her beloved family, relatives, and friends, where her life was never disconnected. This life has never been told, neither in Vietnam nor from around the world. It is either systematically erased by the communist regime, or over voiced by war-victim narratives in international media. It is another Vietnam that the artist insists to show in Crossing the Farther Shore. However, in form of pendulous mosquito nets hanging from the ceiling down to the floor, the artwork allows visitors to view some of its details but not the whole, solely from the outside position. Likewise, a life could hardly perceived by the outsider but only the one who underwent it.

The art form itself, though, recalls to me, as a Vietnamese, the coziest time and space, in which people shared their precious moments at the end of the long working days. Inside the nets, children gathered around the mothers or grandmothers, listened to their stories and took comfort in their company. Also, they could simply share warmth by lying side by side until falling asleep and dreaming. These were the moments when life’s burdens seemed far away. This was the typical life until all skyline buildings popped up all over Vietnam - the life before the 1990s.

Grown up in the South before 1975, Dinh Q.Lê shares the same childhood experience in the mosquito net. However, the unification of the country ironically parted the young southern boy from that life and threw him into the huge wave of refugees pouring over the ocean under the name of boat people, who fled away. On one of the boats, together with his mother, Dinh Q.Lê crossed the sea. By continually sticking with the mother, he was lucky enough to not be lost on the way, during which the bond between mother and son seemed to grow much stronger, especially after the father’s death. Such a close relationship with the mother helped Dinh in feeling her soul and heart still remained in the homeland that was left behind. Thus, only her body was located in the new land. Eventually, these experiences were transformed into Crossing the Farther Shore as an incomplete feeling of crossing but never arriving on the other side as once described by the artist.

The story is based on the interview with Dinh Q.Lê on 29.05.2017 and the video made by Walley Films and commissioned by Rice University Art Gallery, Houston, Texas in 2014.