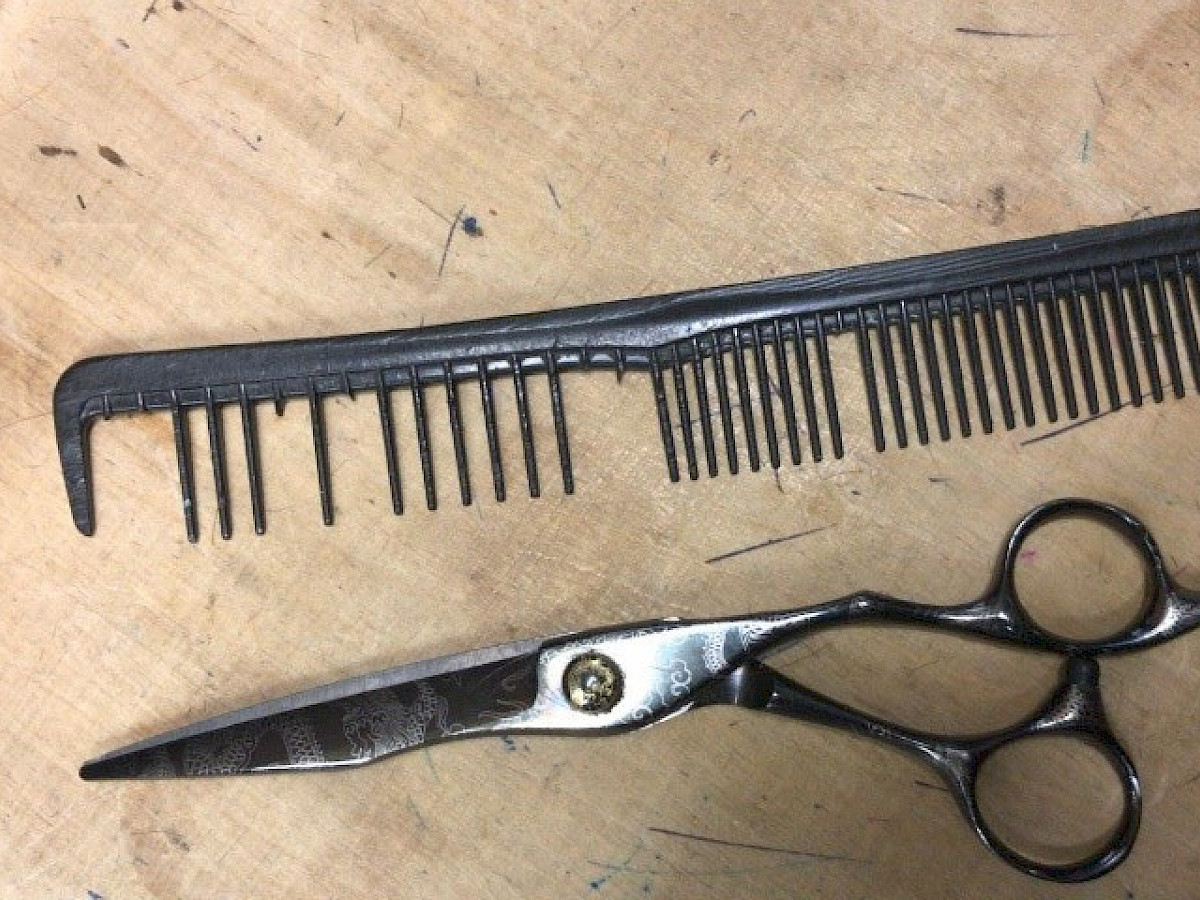 This comb and the scissors have been with Wassim for six years. He is a hair-stylist who works at a hair salon in Goettingen. He does not use these items anymore, but he still has them and carries them with him!

Wassim started working in barber shops since he was an eleven-year-old boy in Lebanon. He learned to cut and style hair and gradually became a professional hair-stylist. He worked later in some other countries such as the United Arab Emirates as well as a country in South-West Africa and he was for a while in France from where he migrated to Germany six years ago.

I met Wassim in his workplace, the hair salon Laufsteg in Goettingen. When I asked him what he brought with him as a migrant to Germany, he brightened up: “That is an interesting question”. He continued: “I would have brought many things, if I had not lost them”. In the process of his migration journey, he lost his luggage - the only suitcase in which he had packed all his work tools which he wanted to bring to Germany. “I had bought them from Africa, they were all brand-new expensive hair-styling machines. I loved them a lot… I made a mistake. I had too much stress that time, so I forgot that I would not get my luggage if I discontinue a transit flight in one of its stops”, he explained.

I asked how it felt to lose those tools. “I was upset for a while, but little by little I forgot…”, he answered. “…because in this life nothing will stay…”, he added.

“Would you like to see something?”, he asked me while cutting hair. He took out a tooth-missing comb and a pair of old scissors from the small barber-bag he had around his waist and said: “I started my job in Germany with these. They are with me now for six years. I decide every time to leave them at home, but I forget.”

It sounded like Wassim did not even think of throwing away these old, inoperable items. I digged deeper, why he keeps them with him if he does not use them anymore. He answered: “I started with these in Germany, from nothing. Every time I look at them, they give me strength… they make me strong again… I started with them… You remember that you started from nothing. You were nothing. Then things will be easier. It was difficult to have them here [at the beginning in Germany]. I had no money, I knew no one here. Someone gave it to me… I want to put them in a box and keep them until I show them to my children in the future”.

It could be interpreted these objects remind Wassim of all his efforts and strains of the past six years of his migratory life in Germany that he has maken through. All the vicissitudes of making a life in displacement are reflected in them. Looking at these comb and scissors, Wassim finds courage to persevere the challenges of every day life in present. He keeps these objects so that in future would show them to his children as witnesses of hardship that silently testify that hard days will be over and good days will come through persistence and endeavor.

These simple ordinary objects provide a tangible link to the past; they evoke the hardship and hard work in a past life that precede the success of making a good life in present. Different emotions such as pride in oneself, self-esteem and dignity are attached to them. However, these comb and scissors bridge past, present and future in which emotions become ascribed to these items, producing ‘emotional objects’ of significance and agency1 which help to enhance the person’s spiritual welfare beyond their utilitarian functions2. As such, these comb and scissors without being functional anymore, turn into objects of the agency to convey inspiration and hope.

From a scientific perspective, things are normally valuabe either due to their usage and instrumental function or their monetary cost. But when things that have ceased to serve such purposes start to be still valuable3, then there could be human emotions and sentiments attched to them. In definition, something is sentimentally valuable if and only if the thing is valuable for its relational properties. It could have been belonged to or given by some one special, or perhaps has been used by a person who is connected to us within a relationship of family, friendship, romantic love, etc. or similar to these comb and scissors, have been used or acquired during a signiﬁcant experience4.