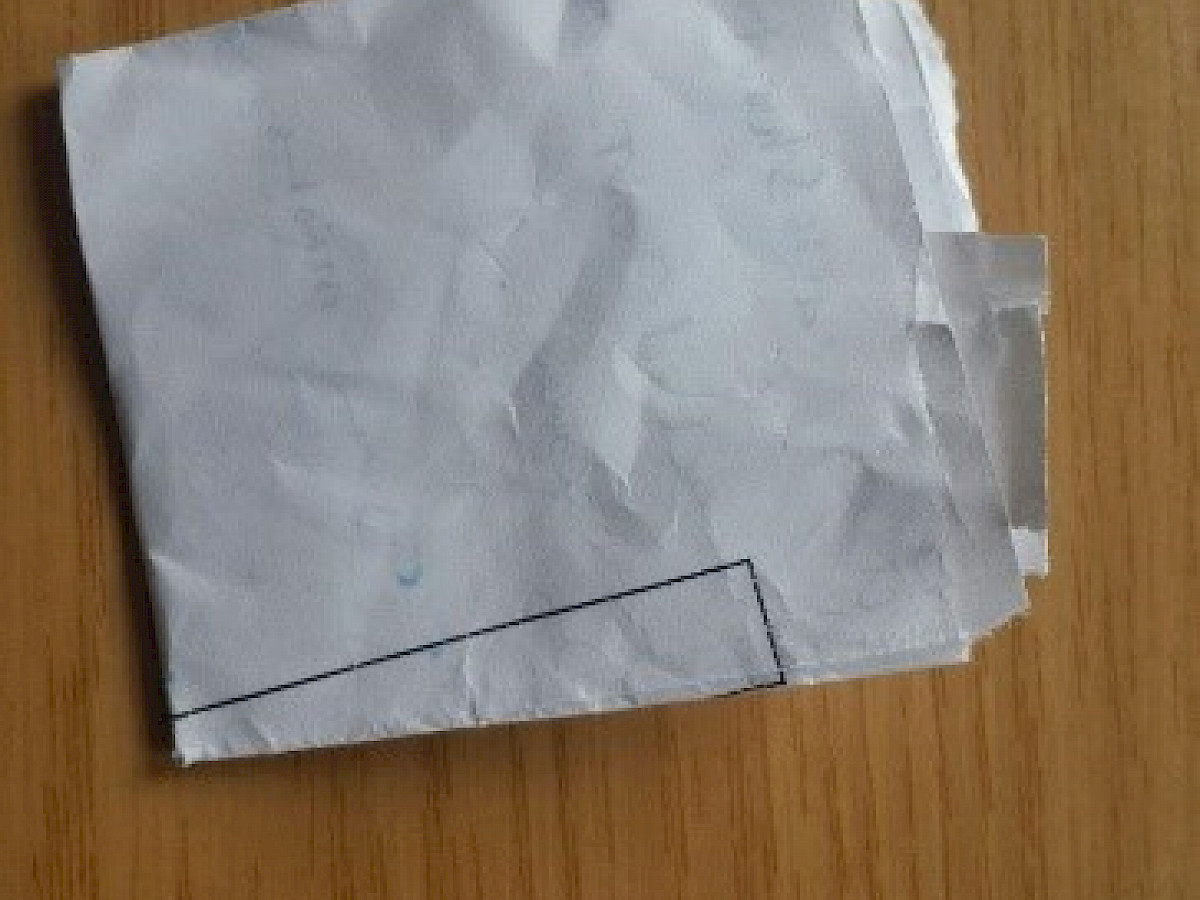 Objects as Means of Motivation

This piece of paper is a rejection note from the Greek border police given to Selma[1]- a Kurdish twenty-year-old woman who crossed the border from Turkey to Greece trying to reach Germany. Selma is now in Germany, and more than a year has passed since the Greek border police gave her this note and deported her back to Turkey. The fold-lines and the pressure marks due to staying long in her pocket have made it ragged, but Selma is still willing to keep it.

Things Attached with Traumatic Experiences in the Past

It is in the midst of Corona crisis that my colleague, Samah Al Jundi-Pfaff, meets Selma in Friedland Camp. To lower the risks, I connect with them via video call and listen to Selma’s story. Samah bridges our communication in Arabic-English.

To join her husband who was already in Germany for a while, Selma left Al-Hasakah, the Kurdish part in northeastern Syria in late 2019, accompanied by four other women; one sixteen and the others in their twenties. Once in Turkey, they stayed in the camp for a short time with some other women from Syria and other countries. During their first attempt to cross the border from Turkey to Greece, they were seven women without any traffickers to guide them. They managed to arrive at the border, where they were captured by the Greek border police, detained in a truck in which there were already 50 refugee men from Afghanistan. The truck transferred them to the border police station where they were interrogated.

The police confiscated their mobile phones and the women were asked to get undressed in order to be frisked. As a result of their refusal, they were called “whores” by a police officer ordering them to take off their clothes. The women resisted and the police resorted into violence and beat them. They were forced to undress. Talking about this experience, Selma got tears in her eyes, swallowing a lump in her throat. She was so intensely hurt by this incident that she used the term “rape” referring to what the police had done to them.

The women were in the police custody for two days and nights without being given any water or food. They were kept in the same room with the other refugee men. I asked Selma whether they felt safe in the same room with the men, she said that they received no harm from the Afghan men, nevertheless, they took turns sleeping in order to protect themselves. She continued: “After two days, we were taken to the seashores by a truck and then were transferred into a boat like potato bags”. Early in the morning, they arrived somewhere apparently on Turkey’s shore and were abandoned there. They started walking, hoping to reach somewhere. After hours, they reached a highway where they saw a police caravan. It was the Turkish police. The women went there. “They offered us water and food”, said Selma in a trembling voice.

For a moment, Selma hesitated to say something. She paused shortly, looking down and then she brought her head up looking like she has amassed a lot of courage to say something and opened up that all of them, the seven women, had got their menstrual periods simultaneously probably due to stress and tension. As they had no sanitary equipment with them, they tore apart some of the shirts they were wearing and used them as pads. Hearing this brought tears into my eyes although I am not sure why it was this part of her story that made me react like this. Perhaps because the clothes one has on, are the last possession that remains after all other belongings and things are lost. When a person brings the clothes they are wearing into use for other purposes as the last resort, it embodies not having and how intensely a person is in need.

In their next try to cross the border, they paid traffickers to lead them. The guide was an Iraqi man. They left Istanbul on foot, having spent one night somewhere near a river, early in the morning they walked towards the sea where rubber boats were awaiting them. Selma and four other women sat in one boat together, the rest took another boat which drowned later. Selma’s boat arrived in Greece, they were arrested by the police and after three days in prison were transferred to a camp, that she did not know the location or the name. In early February 2020, they fled the camp in a truck with some others to Germany, hidden behind goods and boxes. The journey took three days, no toilet, no food, no stop. Finally, the truck door opened. It was early morning. The fresh air gushed in and struck their faces. It was a vast field, somewhere near Hannover.

Selma had previously shared her thoughts and feelings on the way in the dark truck: “Life is meaningless, what is the use of this? Why am I doing this? Why am I alive? Why are we here?”. I was curious to know how she felt then when she stepped out of the truck, so I asked and she only answered in one word : “HUMAN” !! I was not sure whether she implied the meaning alive or if she was alluding to the inhumane way they were treated during their migratory journey.

I asked Selma whether her husband knew about all this. She answered that she could not tell her husband the details, especially about what had happened with the Greek border police. Otherwise, she would be looked upon differently by her husband. Her image as a virtuous woman and faithful wife would change in her husband’s mind, and this is something she did not want to happen. She hinted at what could happen if she told her husband by disclosing that one of the women who had told her husband about the incident with the Greek police was already divorced.

After all the hardship of a migratory journey, the fact that Selma could not share the most hurting incidents of this journey with her husband is even harder. To carry around all those bitter memories like a secret, was another pain and suffering.

Working on the subject of the relation of people and things, I have seen many people that hold dear some objects either because they are attached with a sweet memory, good days in the past or come from a loved person. But this piece of paper, given to Selma by the same police officer that had hurt her incredibly, was a reminder of a bitter, disturbing experience similar to a trauma that one might try to hide somewhere in the unconscious mind. In a deeper look, there are things we sometimes keep as reminders of the difficulties, uneven power relations and feelings of unbelonging. Similarly, the objects we keep as decorations around the house are not necessarily ‘positive’ reminders of one’s past, but also statements about one’s past experiences and life cycles [2]. To ensure it was not a kind of psychological defense mechanism, I delved into the reason why Selma wanted to keep this piece of paper that the Greek police had given her to take her back to Turkey. Selma’s explanation was that she wanted to remember all the pain and suffering she went through. She did not want to forget what the Greek police did to her. “This piece of paper will remind me of the pain that I suffered to reach Germany, so I can fulfill my dreams here”, she said. Her words brought into my mind what Wassim had told me in another interview, when objects become a motivation or inspiration to hold on.
In fact, the object - this piece of paper - has different functions and is a carrier of different meanings for different people; the owner, me that am writing this and for you who are reading this. For the owner it is a special kind of memento. She never wants to forget the humiliation she experienced. Thus, looking at this note, she motivates herself to hold on. Almost something like a personal vow or ritual is connected with the paper. It's a private vow which requires a material anchor. For many others who read this story, this piece of paper might serve to show the dangerous escape route of a Kurdish woman from Syria to Germany, a prime example of many other women on the run.

I asked Selma what her dream was. She replied that back in Greece when she was with other women together, they had already talked about it and decided to study law to bring the Greek border police who took their dignity away into the court. “I want to tell the whole world what they do to the souls of women whom they capture”, said Selma.