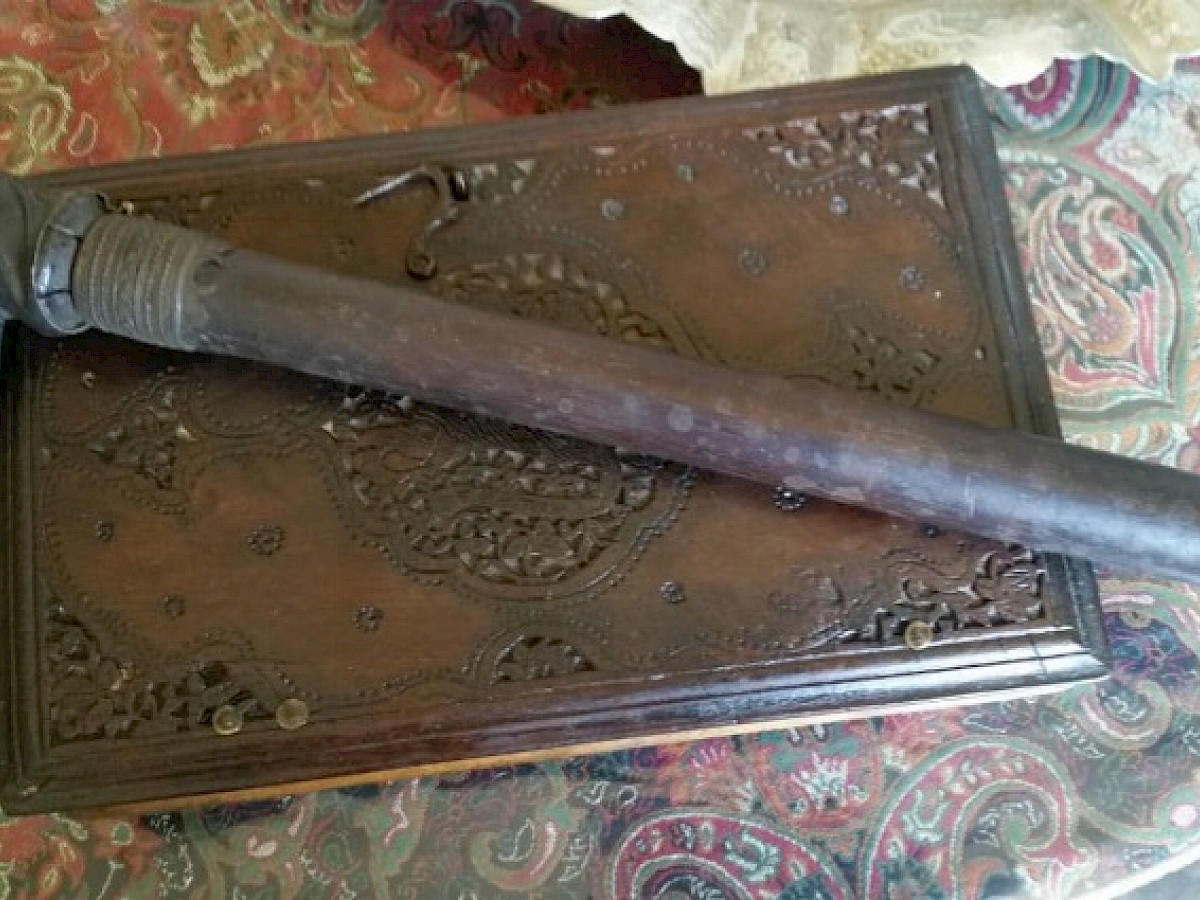 A pipe and three people

The pipe in the picture belongs to Jalil. He brought it with him from Damavand (Iran) to Goettingen (Germany) on the day he left Iran forever, five years after the Islamic Revolution in Iran.

A pipe and three people

The things in the picture might seem ordinary objects or may perhaps look antique. We might associate with a specific culture, as handicraft of people in a specific area of the world. We may probably look at these photos like the objects in museum, getting keen on the design, the carves, the materials or we may wonder to which era they belong to or whether they are valuable.

What if the photo of the holder of these objects is juxtaposed beside them? Looking at the face of the person who owns these, different questions might cross our mind. Have they made these? Have they bought them? Why do they keep them? Who are they? What is the relation of them with these things? Are they selling them? Are they still alive? Where are they now? … Suddenly the focus of attention is shifted on the person and not the object per se. Then we will want to know or explore the life story and adventures of the person and how they relate to the biography of the thing.

Things find different meanings in relation to people, and it is this relation that makes ordinary things special or special things significant.

The pipe in the picture belongs to Jalil. He brought it with him from Damavand (Iran) to Goettingen (Germany) the day he left Iran forever, five years after the Islamic Revolution in Iran.

Looking at the pipe, Jalil recalls the days back when he was a child in his father’s house. A big old two storey clay house in a village in Damavand area near Teheran. Jalil’s father lived in the same house with his two other brothers who were older. Jalil, narrating the story to me, recounts all the details about the house like a picture in front of him: “Seven rooms on the upper floor, seven rooms below, a warehouse there, a grocery shop here as part of the house. Three families lived together in the same house …”. Later, with their children growing older, the two older brothers leave the old house to live in separate places and the house is left to Jalil’s father. As the old house started to run down, Jalil’s father decided to destroy the old house and to build a new one; many people from neighbours, friends and family were there to help. Back then Jalil was eleven years old, wandering among the ruins and the people working, as the clay walls were being broken, Jalil noticed some shelves laying behind a thin wall. On these shelves, Jalil found this pipe. He grabbed it without telling anybody and no one has ever asked about it since.

Years go by, and the civil riots, protests and demonstrations take place on the streets of Teheran. The Islamic Revolution happens. Regime changes and the new Islamic regime comes to power. Disappointed by where the revolution has ended up, like many other youth, Jalil decides to leave Iran. Five years after the revolution, Jalil leaves Iran and he takes the pipe with him as souvenir.

Jalil’s motivation for bringing this with him was on the one hand his interest in old things, on the other hand, it was a reminder of his old days in his father’s house. Moreover, the memory of the mysterious wall hiding it and how Jalil happened to accidentally find them made it even more special and personal.

Up to here, this pipe is related to Jalil in the mystifying way he found them. They evoke the old days in Damavand, his childhood, his father’s house and any other things connected to the house.

Fifteen years go by. Jalil has settled well in Germany, married to a German woman and has a child. One day, a cousin of Jalil who is ill comes to Germany for medical treatment. He is the son of Jalil’s oldest uncle. He stays at Jalil’s. Late at night when the wives and children sleep, they sit together talking and reviewing old days. The cousin recalls how his father, who was back then the head of the village, died of cancer lately. He tells Jalil that his father, when he was in extreme pain, kept asking: “Why don’t you find my pipe? Why don’t you bring me my pipe?”

“No one had seen my father smoking a pipe. No one knew he had a pipe. He kept talking about a pipe we had never seen”, Jalil quoted his cousin, who narrated the story. “My mother said to him that he did not ever smoke! When we asked him what pipe he was talking about, he told us that when he had been a twelve to thirteen-year-old boy, he had accompanied a caravan of grocery from the village to the northern area of the country [during the Iranian holocaust, see footnote][1] in a cold winter”, Jalil continued quoting. On the way, an avalanche hit the Caravan. All the people and animals were shoved down the valley. The twelve-year old boy fought his way out of the snow and cried for help. Searching around for the caravan people, he saw a man huddling in front of a small cave at the foot of the mountain. Crying out loud to him for help, he was surprised that the man was not reacting, so he went to the man. It was an old man holding a pipe between his lips, frozen to death, huddling. In front of him was a dead fire. The twelve-year-old boy ran screaming. Luckily, the caravan people were alive and pulled themselves out the snow. They buried the old man’s body and let the little boy have the pipe.

Surprised at what he hears, Jalil says to his cousin that the pipe is here with him. The cousin looks at Jalil in disbelief and says: “How is that possible? A pipe no one has seen it in the family, how could it be here with you in Germany?!” Jalil explains to his cousin about how he found the pipe in the wall when the old house was demolished.

“I brought the pipe to my cousin, I gave it to him. Holding the pipe in his hands, my cousin wept a lot”, recounted Jalil. “I asked my cousin to take the pipe with him, but he refused and said the safest place for it was with me”, he continued. The cousin returned to Iran and died after a few years, and the pipe is still with Jalil. Fascinated by the life story of the pipe, me and Jalil also laughed at what he told me about his two other cousins – every time they see Jalil in Iran they ask him in a humorous way: “Why don’t you bring our inheritance back to us?”

Now that we know more about the biography of the pipe, two other persons are attached to it. Jalil’s uncle and the old man. Jalil’s uncle remembering it at the time of his death might be because of its association with ‘death’, the old frozen man… We do not know for sure, but perhaps this pipe has been an extraordinary object for the uncle, a memoire of that heavy winter, snow and avalanche, the cold fire, danger and death. Quite an adventure for a twelve-year-old boy. It had been such a peculiar thing that the uncle had hidden it on the shelf behind the wall.

Before knowing about the relation of the uncle with the pipe, it was a special object to Jalil. Something that kept him connected to his past in his home town in Iran. However, this special object has become even more significant for us and probably for Jalil too after the revelation of its life story before he found it. It suddenly connects Jalil to his uncle and the family, maybe in a sad way. It is no more just a personal thing that he had found and wanted to keep for himself. Looking at the pipe now, more than remembering his own memories, Jalil pictures the told memories of his uncle. It has turned into something that rebinds the family relations.

Hearing this story, we might also be interested in the story of the old man huddling in front of the cave. Objects could be connectors of people and sometimes reshape the relations between people while also being laden with adventures and feelings. This pipe connects the old man who was smoking it, the young uncle who found it, the older uncle who ached for it before he died, the boy Jalil in Damavand and the kiosk owner Jalil in Göttingen and perhaps in future Jalil’s daughter, Sara, would add some more pages to this biography.

[1] Despite declaration of neutrality in the first world war, Iran was invaded by imperialist powers; Britain, Russia, Ottoman and Germany from the south, north, and west. The World War I caused numerous problems for Iran (Zahed, F., Moradi, N. 2017. Effects of World War I on Iran Situation. In: 34th International Academic Conference, Florence). At least 8–10 million Iranians out of a population of 18–20 million died of starvation and disease during the famine of 1917–1919. The Iranian holocaust was the biggest calamity of World War I and one of the worst genocides of the 20th century (The Great Famine & Genocide in Iran: 1917-1919 2nd edition UPA: 2013). Back at then (before Reza Shah building Haraz Road) people would carry groceries and farming products with animals from the villages to the famine-stricken areas and bring other goods and products back with them to their villages.