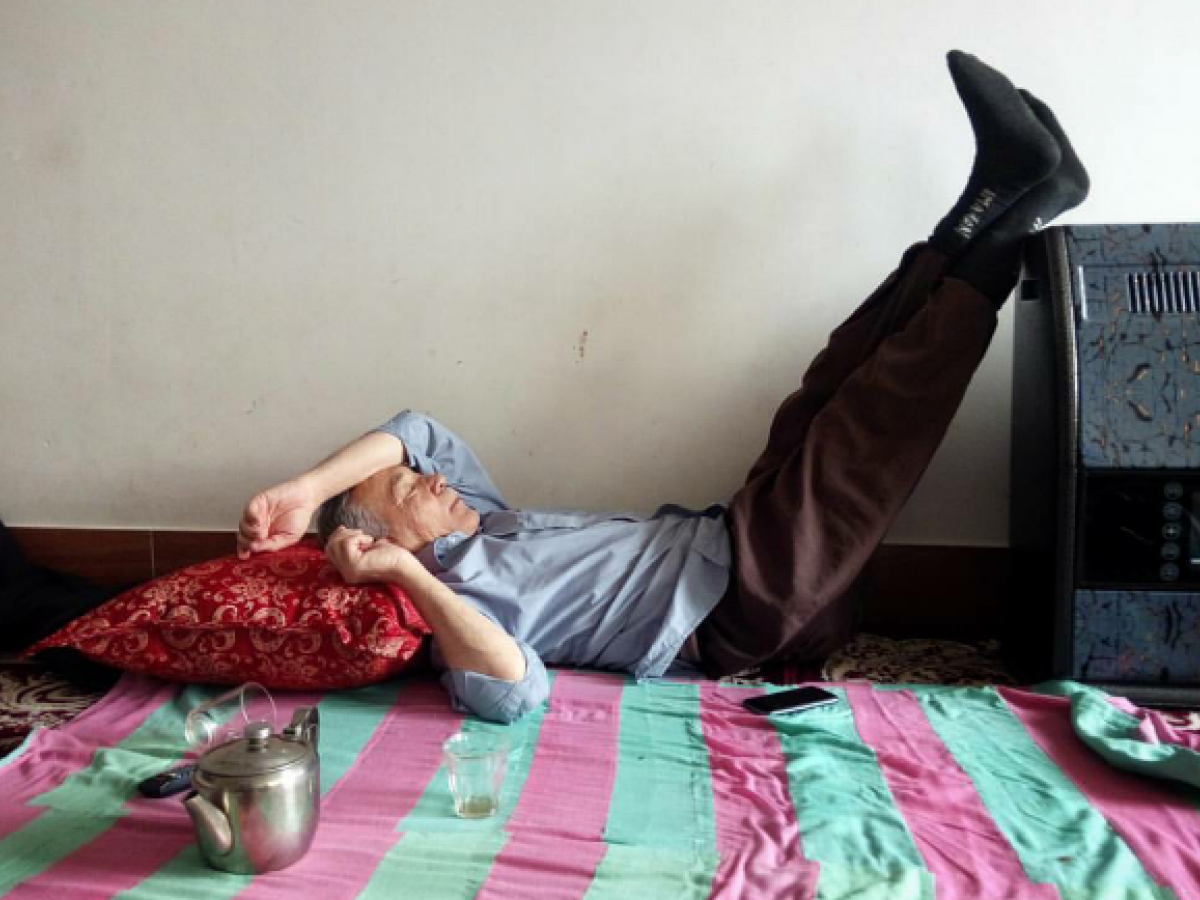 A picture of a man taking a nap. Maybe the man has just returned from work and is dozing, as he wears a shirt that people usually wear at work, and he still has his socks on. His feet lean against the heater, showing it is a cold day. Next to him are a teapot and two empty glasses. Judging by the simple furniture, one could say that he is in a workers' home.

Home is where my father is

It is a photo of Mostafa Rezaie, the photographer and graphic designer whom I mentioned in The new camera, an Afghan migrant in Iran. He took this photo of his father to take part in a national photography contest. It won a prize of 10 conventional Iranian gold coins which back at that time [1] was equivalent to a value of 4.000 Euros. The picture shows his father sleeping on the floor with his legs up on the heater, his socks rolled up over his pajamas (older men usually wear pajamas under their pants to block the cold), a steel teapot [2], two empty glasses beside him, one sitting on its side.

The picture shows an everyday situation, it looks like an afternoon nap, peaceful with a sort of lightness in its air. At first sight, it is not too impressive artistically. However, the caption under the photo posted on Instagram tells more about it: “Sturdy like a mountain even when he is asleep, every day that I put the tea pot beside him, I see him drowned in a deep silence and I wonder to which internal outcry this deep silence is tied. Sometimes I hear him whispering something, I sharpen my ears and I hear verses of Masnavi [3]. I look at him and I feel confident in our being, I feel secure and safe again, for me, my sisters and my mother. He is the most real hero I have ever seen. It does not matter what life brings on us, where it sends us, after all we have HIM to keep us safe and secure. It does not matter how far away we are from home. For me home is where my father is (...)” [4].

It is the caption in which the photographer expresses his feelings, his hopes and his thoughts about his own experiences of migration: His words reveal, that behind this tranquility and lightness of the afternoon nap lies much adversity and pain [5]. The adversity and pain a migrant family have endured to seek a haven in Iran, hoping to finally find peace, but yet after a generation has passed they are not considered and treated like citizens. The adversity and pain from which Mostafa takes refuge in his father, a figure that to him signifies a home in which he feels safe and secure from the perils that after about thirty years of living in Iran still exist and affect their lives.

[1] Due to the sanctions imposed on Iran and economic instability, the Euro and Dollar currency exchange rate is very volatile.

[2] Back from work tired or during the break time at work, tea is the most popular and the only drink Afghan workers drink. It is like a sincere friend who is always there to take the weariness of the day away.

[3] The book of the Persian poet Molavi

Ein Bild im Wert von 4.000 Euro
Documents of the Undocumented
Striving for Normality
Amin's home
The Torn Banknote
The new Camera
The torn family
Dust from a Previous Life
Papers: Things Obtained in Displacement
Audio cassette from Iran
A pipe and three people
Theft of Things and Time
When your perspectives affect your materiality…
Open
Archive