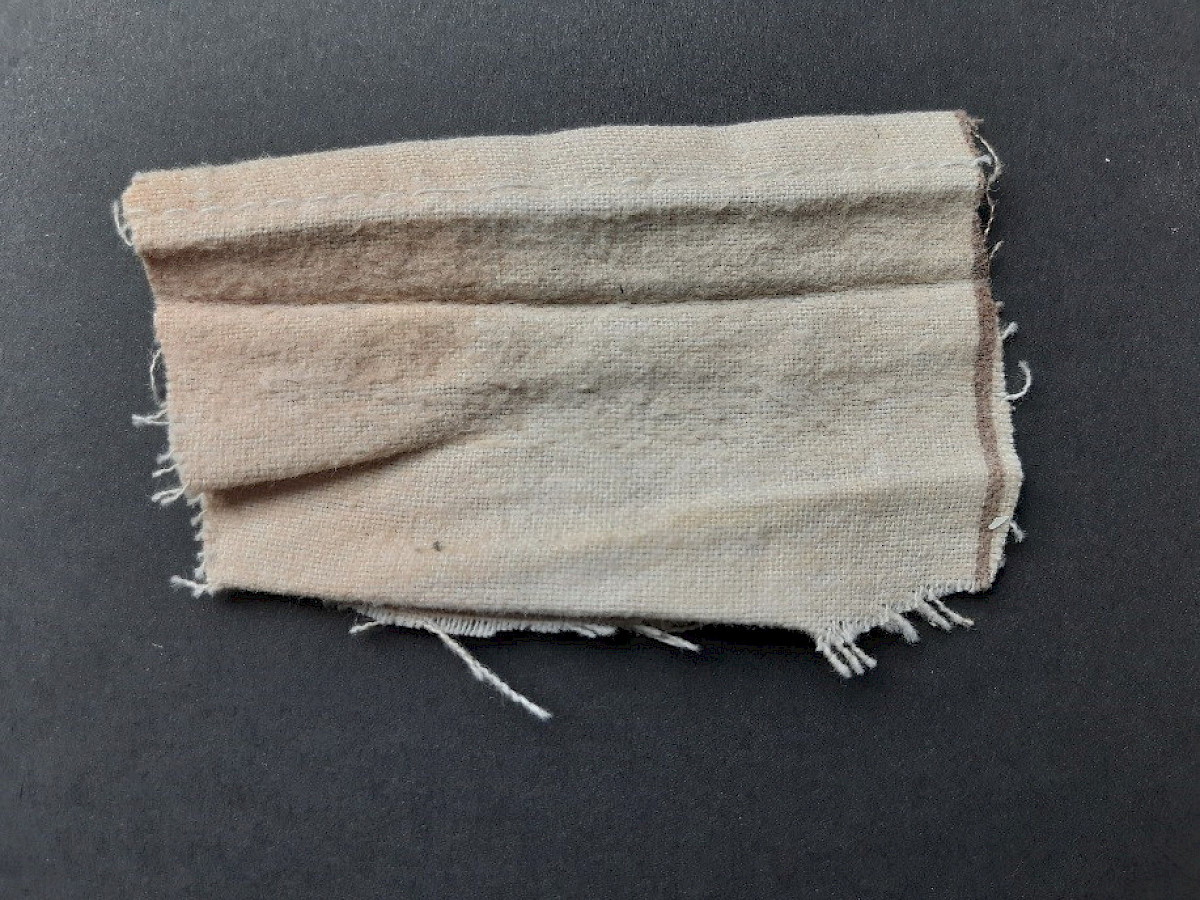 What are your first thoughts on this little piece of cloth? What was its use, what did it belong to? The piece of cloth is small, changing its color from a shade of beige to bright red. With each location it passed, the uses that have been transferred to it and the continuous change in its meaning, it can be clearly seen that migrating objects are neither static nor unchangeable materials ‘carrying’ specific mean­ing, but are in a constant process of adaption and transformation.

At the beginning of the story, the little piece of cloth was a whole blanket. In 2012, two weeks after the Syrian revolution, Wael received the blanket from his grandmother. At this time, he still lived with his grandmother in Homs, whereas his family had been displaced to an area near Banias in Syria. Due to the danger of Wael being ‘captured’ by the police to serve in the military, his grandmother pro­vided him with a couple of things in case of his conscription: She gave him a pillow, the blanket and the typical Syrian food Makdus. During his time in Homs, the situation continuously changed; there­fore, Wael had to eventually move to his parents in Banias and took the bag his grandmother had supplied with him.

In Banias, he still used the whole blanket as an extra bedsheet, especially during night-time.

Unfortunately, his situation didn’t improve. Because he couldn’t postpone his military ser­vice, he had to flee from Banias again – this time to Lebanon. For the next journey to Lebanon, his mother pre­pared a bag mostly filled with clothes, including warm pullovers and food for him and the blanket: As a reminder of his grandmother, it was of great importance to him.

After one month in Banias, Wael went to Lebanon in August, shortly after Ramadan, where his uncle lived. At his uncle’s place, he was offered a mattress to sleep on, but only one blanket to cover during the night. As a consequence, Wael used the sheet for covering the mattress on which he slept on and therefore found the next use for it: a bedsheet.

After two months of staying at his uncle’s place, he moved with a relative of his uncle’s wife from Tripolis to Qubeh in Lebanon. At this time, no one offered Wael and his relative a home to rent, so they decided to just sleep in a shop with no electricity and no possibility to cover the window. Wael made use of the blanket again: It became a curtain!

In May 2013, Wael moved to Turkey to join a friend who at the time lived in a store with 20 other people, all sleeping under one roof. The blanket, here, was not covering the mattress but the ground and became a protection against the dirty floor. During his time in Turkey, he moreover moved to five different stores and used it as a curtain, a blanket or as a carpet.

A turning point occurred when he moved to Istanbul. During all the stations the blanket had passed, it became very dirty, a big hole emerged and it became more and more difficult to clean. That’s why he made a bold decision and cut one of the blankets corners off. What did Wael feel, when he cut it? Was he not sad to only take a little piece of it with him, after all those moments in which the blanket became so helpful? Wael expressed his thoughts as follows: “I’m going to keep moving and moving and moving. And it is so dirty. It is so difficult to have it in my bag, so the only way will be to just pre­serve a piece of it - as a souvenir of my grandma.” He left the rest of the blanket for his friends in Turkey, so at least they would be able to benefit from the numerous possible uses of the bedsheet. Having arrived in Friedland, Wael decided to donate the piece of cloth to the Friedland museum. He didn’t feel sad to leave his memory here; instead he understood it as a way to appre­ciate his grand­mother and her contribution to his journey to Germany.

Indeed, the piece of cloth shows the possible transformations an object can go through when there is an urgent need for a blanket, a curtain, or a carpet. Moreover, it shows that which in the daily life mostly goes unnoticed - every object is always in a state of constant change. We as human beings recycle things, change their use, throw them away or repair them. It is only in intensive conditions like flight and forced migration that this shift becomes a ‘felt reality’, connected to emotions during every change and to bold decisions one has to make to enable the shifts that are of most use in each situa­tion.

In which contexts will the rest of the blanket probably be used today by Wael’s friends? Even though it is only possible to guess, it can be stated for sure that there is not only one answer to this question, but instead a multitude of them.

The torn family
Theft of Things and Time
The Torn Banknote
The prayer book
The self-made barbecue
"The Last Things"
Zahra's Bangle
About the value of the title deed
Objects as Means of Motivation
Amin's home
A Picture worth 4.000 Euros
Tableware Quarrels
Open
Archive