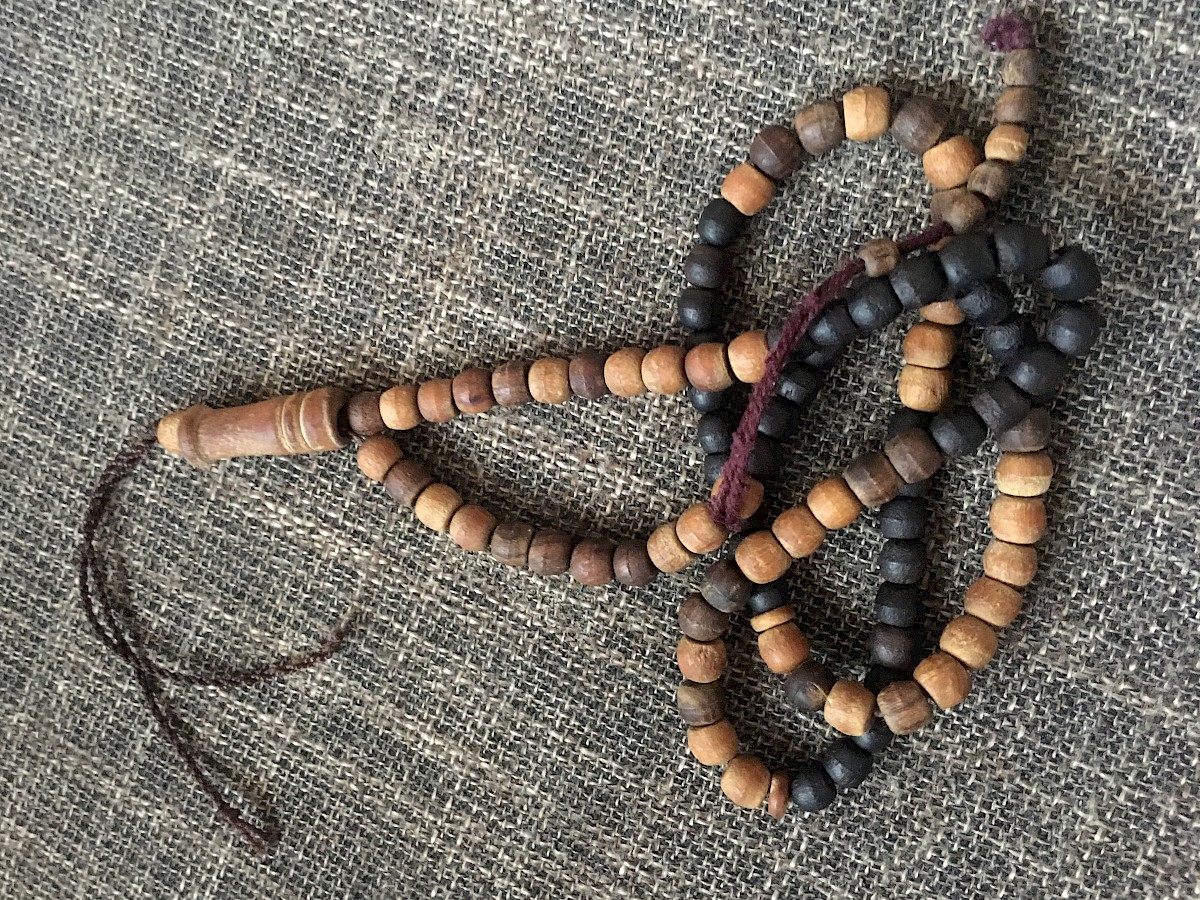 The Islamic prayer chain, the misbaha, is one of five personal objects that accompanied Monzer on his escape. It originates from Mecca in Saudi Arabia and was given to Monzer during the Hiǧra pilgrimage. Before his flight, Monzer used the Misbaha in a religious context, but the experiences during his escape give rise to new functions and meanings of the object.

The Islamic prayer chain, often referred to as a misbaha, consist of 99 different small and large wooden beads, which are strung together on a fabric cord to form a chain. At the top of the chain is an approximately three-centimeter large, light brown piece of wood onto which a small light brown bead is attached. From this bead emerge two black cords, by which the chain can be held. The wooden beads of the chain are colored in different shades of brown and black.

The Islamic prayer chain comes from Mecca in Saudi Arabia; Monzer’s uncle passed it on to him after his Hiǧra pilgrimage. Monzer utilizes the misbaha during his flight, whenever he wants to find peace and new strength and hope for the difficult next steps on his journey. He takes it in his hand, runs his thumb over each wooden bead and recites one of the 99 most beautiful names of Allah for each bead. With particularly flat, small wooden beads, he recites the Shahada, the creed: There is no god but God and Muhammad is the Messenger of God.

During his time in Syria, the Islamic prayer chain has a primarily religious value: He recites the 99 most beautiful names of Allah, just as he prays five times a day, does not drink alcohol, and fasts in the month of Ramadan. In Egypt, the first stop of his escape, he performs this ritual several hundred timed a day; it gives him security and peace for the moment. On the rubber dinghy during the journey across the Mediterranean to Europe, he recites the names of Allah, performs supplications and recites the surahs that are particularly central to him.

With Monzer’s new residence in Germany, his relationship to the subject of religion has changed. He himself says: “I am still a Muslim, but no longer religious” and asks himself questions like: “How could God let the war in Syria happen?” Today it is more important for him to be able to help people – so he does not recite the 99 most beautiful names of Allah several times a day, as in Egypt, but tries to shape his life through positive actions, such as using his interpreting skills in Friedland.

Basu and Coleman note that objects can reveal a person’s altered ways of seeing and behaving – the “status” of a person becomes apparent, which in Monzer’s case changed and developed through the experiences of his escape.1

While the misbaha once generated Monzer’s religious reality2, today it brings to life the experiences of his journey as a refugee and is a memento of his hometown and his experiences. Thus, the misbaha is no longer in his pocket as a constant companion, but is now housed in Monzer’s apartment in Eschwege. Nevertheless, it reminds him of the most important stations and events of his escape and it doesn’t let him forget his hometown and his uncle.

[2] Sonia Hazard emphasizes that religious objects are not just "containers" of ascribed meanings, but are touched, heard and seen. They are thus not passive, but actively generate the reality of their owners (e.g., shaped by their own values and experiences) through their representational nature. See: : Sonia Hazard (2013): The Material Turn in the Study of Religion. In: Religion and Society. Advances in Research 4 (1). P. 69. New York, Oxford: Berghahn Books.