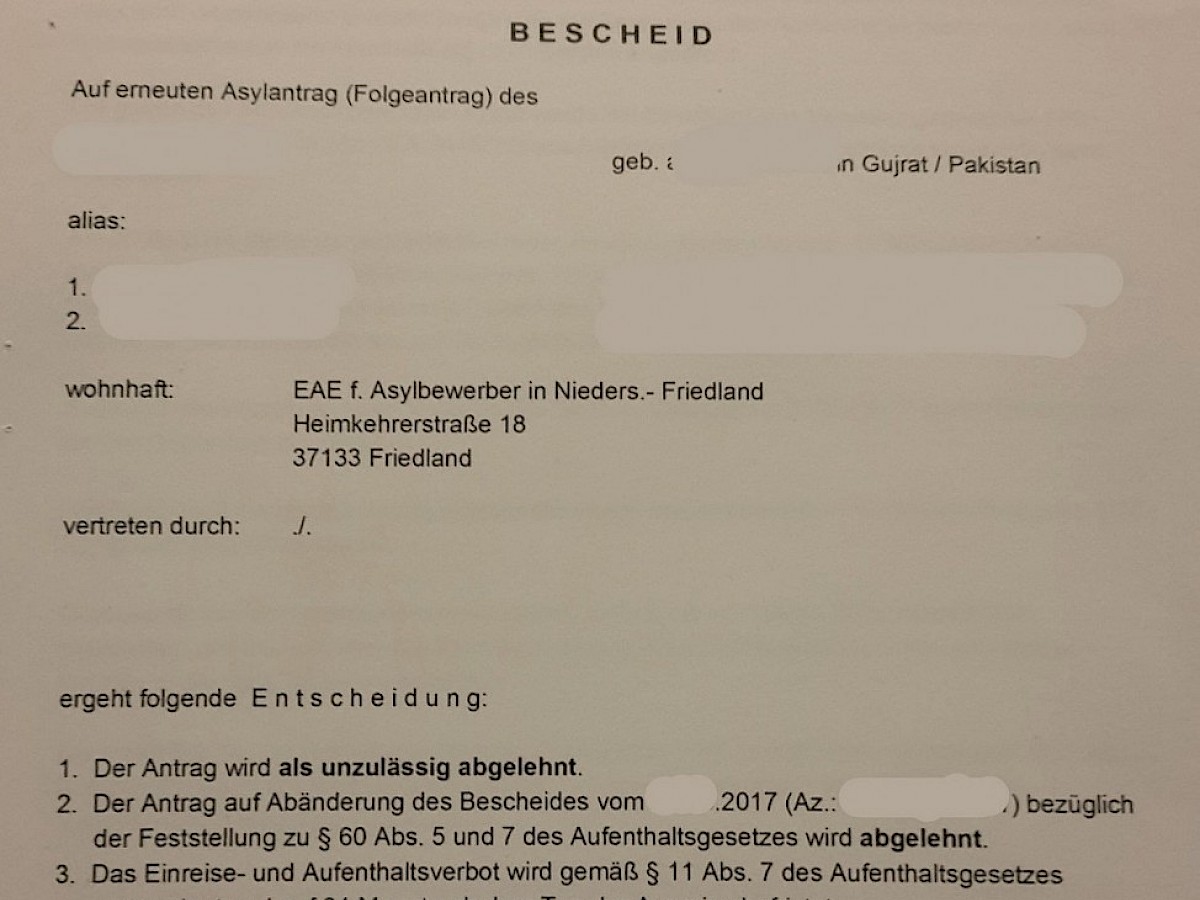 Results of administrative procedures are materialized i.a. through notices on asylum decisions. Even though these papers contain ‘objective facts’, they often affect people in various ways. This section is about the distribution of these papers, different ways of dealing with them, and their effect on people in different situations.

Bureaucracies are strict boundary management regimes [1] in terms of accessibility, responsibility, and information. For asylum seekers in particular, these organizations entail opacity and a scarcity of information that has a fundamental impact on their lives, above all decisions on asylum.

During my prior research in Hamburg in 2016, I observed daily the impact of such official papers for Syrian and Iraqi refugees. For those longing for certainty regarding their fate, the distribution of letters became an emotionally charged event. Usually, a staff member of the reception center called out the names of those who had received a letter. The ones mentioned usually tensed paved the way through the crowd, which gathered every forenoon in the yard. Camp inhabitants could tell by the size of the envelope if it was the monthly account of their social benefits or an asylum decision – the latter was always a thrilling event. Hastily, the person in question opened the envelope and deciphered the ruling. Usually, it took many people to confirm the outcome and whether cautious happiness (about full recognition) or chagrin (about subsidiary protection status [2]) was appropriate. Meanwhile, the bystanders discussed their own prospects.

Even though decisions on asylum were the most decisive documents, other documents – passports, health insurance, and habitation certificates, residence permits, or allocations decisions – were also important. Because there was no way to know which document is demanded by which authority, it was safest to have them always at hand.

Many asylum seekers I met kept their documents ordered in transparent envelopes to keep track of this steadily growing paper mountain. Often one folder was structured according to two classification criteria (e.g., issuing authority and issue date), making things even more complicated. Lacking language and acquaintance made it hard to identify which papers were essential or not, and thus all documents were filed.

Years after her naturalization, a friend of mine told me once that these folders, which hold the documents of her asylum procedures, contain her whole life. By this, she not only meant mixed memories but, above all, years of (justified) existential angst because her asylum claim was a hair’s breadth from failure. Fundamental experiences like these give these collections of documents their significance and weight.

I received several messages from devastated individuals after they received their rejection of asylum. However, for some individuals who have passed through these processes with few expectations left, even such administrative decisions lose their relevance. Arif Ibrahim, whom I introduced in Stolen Things and a Stolen Lifetime, is an example of this. I was astonished by his handling of official documents: here there were no folders, transparent covers, or meticulously kept documents that I have regularly seen in the hands of newly arriving refugees. Arif just kept the latest notifications which proclaimed the far-reaching consequences of the rejection he had tried to evade so often by moving around in the past. He had only three documents with him: his temporary residence permit, his latest negative decision on asylum, and the information sheet about his pending transfer to another camp. Arif managed his documents quite pragmatically – even though he was not able to read them. Nevertheless, his experience made him able to figure out the essentials and to get rid of the rest.

[1] Bierschenk, Thomas. 2019. How to study bureaucracies ethnographically? Critique of Anthropology 0(0): 8.

[2] Subsidiary protection status is a limited protection status for people who are not recognized as asylum seekers but who face serious harm in their country of origin. It includes a one-year residence permit and restrictions concerning family reunification; see: Laubach, Birgit. 2016: Subsidiary Protection. Electronic Document.  <https://legal-dialogue.org/subsidiary-protection-instead-full-refugee-status-complicates-family-reunification>[05.02.2019]