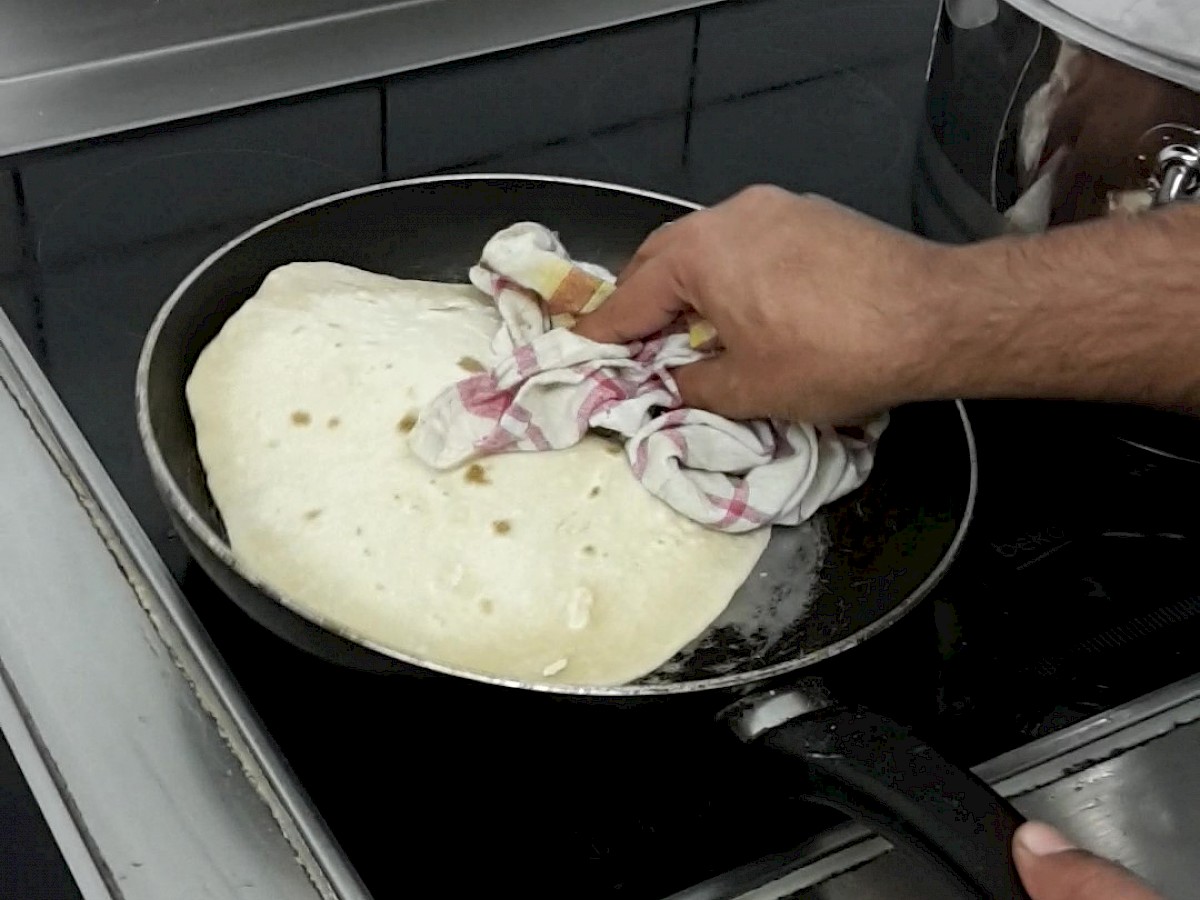 Shared meals are an opportunity to invite and entertain neighbors and friends, even if in the confined rooms at the transit camp. Besides drinking tea, this is a central event of enjoyment and temporary communality, which are often able to bridge religious, ethnic, and national affiliations.

From Thing to Event: Dining in the Meantime

Usually, Arif Ibrahim made dal (lentil stew) or curries of potatoes and vegetables. His friend Raafe prepared chapati (unleavened flatbread) while Haani usually prepared the room for dinner and did the dishes afterward.

I was invited for dinner a couple of times, often spontaneously when next-door neighbors came around. The dinner, which I depict below, was the last one Arif, Raafe, and Haani had in Friedland; the next morning they were transferred to another accommodation close to Braunschweig.

Arif seared the chicken in the curry spices (I had brought both of them) until it was almost well-done before adding the other vegetable ingredients – onions, potatoes, carrots – water, and salt. He smelled the intense aroma of the searing meat and herbs, which unfolded throughout the whole building, and seasoned his culinary artwork until he was satisfied. “I could do better if I had proper cooking utensils,” he said, “but this is very yummy, nevertheless.”

Even though the ingredients were good this evening, cooking in the shared kitchen of a camp requires improvisation and compromise. In particular, making chapati acceptable to the three friends turned out to be a real challenge. Raafe rolled out the dough with a can of shaving foam (since rolling pins were too expensive) – this was not an issue. However, browning the bread – usually done over an open fire – on an electronic stove, proved to be difficult because the stove was not always hot enough to blister it. Raafe then put the flatbread directly on the stove.

That evening an Afghan and a Romanian came to Raafe and Haani’s room, initially for a short last visit, but they ended up staying all evening, enjoying the hospitality. [1] Most of the people gathering in the room [A1] had long asylum biographies in different countries; in fact, for two of them, it was their second time in the Transit Camp Friedland. They talked with each other in Urdu, German, English, and Arabic. Due to language issues, there was always one person who could not participate in the conversation until it shifted into the next language, then another person was ‘off’ for a while.

One topic of these discussions was the comparison of different foods, tastes, and forms of preparation from home. “In Baghdad, they let the flatbread dough rise for several days. They also knead it many times before baking, this Iraqi brother told me. We do it simpler and swifter, and it's also good,” Raafe said, and everyone agreed. The meal was praised over and over. Arif smirked, delighted, and he thanked me for buying groceries so often that I began to feel a bit embarrassed.

Another subject was life in the camp, especially bothersome aspects such as the overloaded WiFi network or the poor quality of the food. Moreover, the asylum procedures were a central theme – the whole group had been rejected and they made fatalist jokes on this matter. For a moment, sharing laughter and Turkish cotton candy provided some respite from the grimness of their lives.

These companions and neighbors of different national, ethnic, and religious backgrounds negotiated what Tilmann Heil calls “minimal consensus”, [2] which allows living together despite diverging views, identifications, and values. “It doesn’t matter if someone is Muslim, Christian, Jew, or even gay. Here, we get along and respect each other.” Like a mantra, these sentences were repeated in different forms and languages that evening, expressing the bedrock of coexistence (in camps).

[1] See also Vandervoordt, Robin. 2017. The Politics of Food and Hospitality: How Syrian Refugees in Belgium Create a Home in Hostile Environments. Journal of Refugee Studies, 30(4): 605-621.